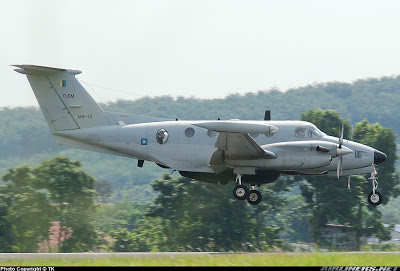 Contacted by Bernama, he said the RMAF would set up a special team to probe the crash of the Beechcraft B200T plane near the munitions terminal of the Butterworth airbase at 5.18pm.

“I am on my way to the crash site. I have yet to get all the details,” he said.

Raja Mohamed Affandi expressed his sadness over the incident and hoped that the families of those involved would exercise patience.

Meanwhile, Defence Minister Datuk Seri Hishamuddin Tun Hussein, in a post on his Twitter account, said he had instructed the Chief of Air Force Gen Datuk Seri Affendi Buang to oversee the investigation into the crash.

“I have instructed the Chief of Air Force to personally monitor (the probe),” he tweeted.

According to the RMAF official portal, the ill-fated aircraft had been used for maritime surveillance by the 16 Squadron based at the Subang airbase.

The main task of the 16 Squadron is to provide early warning and immediately report the identification of vessels in territorial waters and the Exclusive Economic Zone (EEZ).

The 16 Squadron has greatly assisted government agencies to reduce crime and smuggling in the EEZ.