SINGAPORE – The Hong Kong authorities will release the nine Singapore Armed Forces (SAF) armoured vehicles that they had detained since last November.

In a statement on Tuesday (Jan 24), Singapore’s Foreign Affairs Ministry said Hong Kong’s Chief Executive Leung Chun Ying replied to Prime Minister Lee Hsien Loong’s earlier letter to inform him that the Hong Kong authorities have completed their investigations, “and will be releasing the SAF Terrex Infantry Carrier Vehicles and other equipment to the Singapore Government through the carrier”.

“This is a positive outcome,” the ministry said.

“Prime Minister Lee has replied to Chief Executive Leung to thank him for Hong Kong’s cooperation in resolving this matter.”

Hong Kong Customs had, on Nov 23, detained the nine Terrex vehicles and other equipment on board a container ship that was transiting in Hong Kong.

The vehicles were bound for Singapore after a SAF military exercise in Taiwan.

The shipment was impounded because vessel owner APL had failed to provide appropriate permits for the vehicles, the South China Morning Post reported. 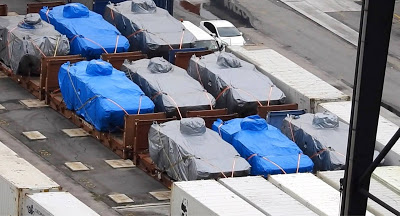 Earlier this month, Defence Minister Ng Eng Hen said in Parliament that as the property of the Singapore Government, the vehicles are protected by sovereign immunity even though they were being shipped by commercial carriers. This means they cannot legally be detained or confiscated by other countries.

He also said PM Lee had written to Mr Leung to request for the Terrex vehicles to be returned.

The Hong Kong authorities replied that investigations would take some time to complete, and the matter will be handled in accordance to its laws.

On Tuesday, Hong Kong’s Commissioner of Customs and Excise Roy Tang said in response to media queries that as an active and responsible trading partner in the global economy, the Hong Kong Special Administrative Region is committed to complying with international standards of strategic trade control, and Hong Kong implements a robust control system to achieve it.

“Import, export and transshipment/transit of strategic commodities in breach of licensing requirement are criminal offences punishable under the Hong Kong law. The action by the Hong Kong Customs on November 23, 2016 was taken because there was a suspected breach of the Hong Kong law,” he said.

Mr Tang added that Hong Kong Customs has completed its investigation of the suspected breach, and that the investigation might lead to criminal prosecution.

“The military vehicles and the associated equipment will be returned to Singapore through the carrier,” he added.

A spokesman with APL said: “APL is working with the relevant authorities and various stakeholders to ship the vehicles and associated equipment that were detained in Hong Kong in November 2016, back to Singapore.”