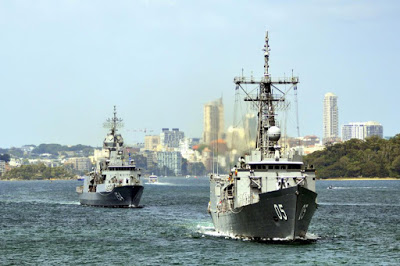 The lead ship of Royal Australian Navy’s Anzac-class frigates departed Fleet Base East in Sydney for the first time in 2017 to begin her deployment work ups.

HMAS Anzac sailed out in formation with HMA Ships Melbourne and Parramatta.

Coming out of a maintenance period, Anzac headed for the East Australian Exercise Area, the Australian Defence Force training zone off the New South Wales coast. Anzac’s first week at sea included a ‘shakedown’ period, designed to refresh the knowledge and training of ship’s company, in addition to teaching the ‘new joiners’ what is required in order to live and fight in the maritime environment.

Upon her return to Fleet Base East, Anzac will embark members of Sea Training Group to commence a formal training and assessment phase. The Group are responsible for delivering effective training to the Navy’s Fleet, and will train and assess Anzac’s readiness across all disciplines.

In another milestone for the frigate, HMAS Anzac completed an Evolved Sea Sparrow Missile firing against an airborne target in late 2016, for the first time since her since her Anti-Ship Missile Defence upgrade in 2014.

The milestone was achieved during her Sea Qualification Trials as Anzac proved the capability of her weapon and sensor systems. The firing took place after the frigate’s maintenance period and completing she completed the Mariner Skills Evaluation, which allowed the ship to safely proceed to sea.