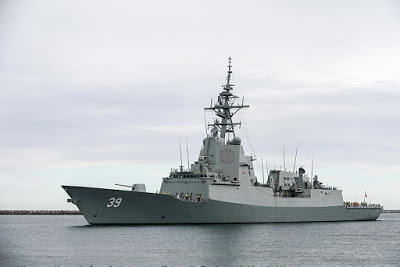 HMAS Hobart has gone to sea for its acceptance trials. (all photos : Aus DoD)

The future Air Warfare Destroyer (AWD) Hobart on monday morning departed the wharf at Techport Australia to commence a second round of more advanced Sea Trials off the coast of South Australia.

“These trials are the culmination of all of the preceding design, production, activation, integration and test activities conducted on Hobart to date,” Commodore Bourke said.

“Sea Acceptance Trials are a significant milestone for the Project as it is the first time that the AWD will be tested as a complete Mission System.”

In order to fully test the ship, Hobart will work closely with a range of fighter aircraft, surface ships and helicopters, as well as other civilian platforms in a range of simulated scenarios.

Raytheon Australia’s Managing Director, Michael Ward noted the complexity and sophistication of the AWD combat system which will be tested during the trials.

“As the combat systems integrator for the AWD project, Raytheon Australia has applied its highly skilled Australian workforce of 350 architects, systems engineers and project managers to the AWD project over the last decade.” 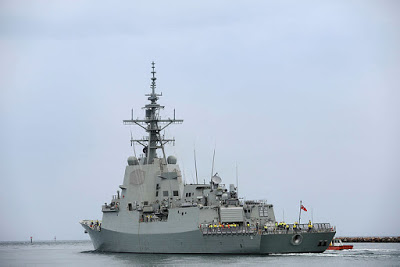 “Raytheon Australia is responsible for the integration of ten major subsystems, including the Aegis Weapon System, which is provided through Foreign Military Sales, and associated delivery of more than 3,500 major pieces of combat system equipment required to establish the warfighting capability of the AWD.  This will contribute to making the AWD the most lethal and sophisticated warship ever operated by the Royal Australian Navy.”

For ASC Shipbuilding CEO Mark Lamarre, these trials provide the formal testing and acceptance phase for the platform system.

AWD Alliance General Manager Paul Evans said the Alliance is looking forward to the successful completion of ‘Sea Acceptance Trials’ as a pre-requisite to enable the AWD Alliance to deliver Hobart to the Commonwealth in mid-2017.

“On delivery of our first Air Warfare Destroyer, the Royal Australian Navy will gain a new and potent capability it has never before possessed, and the most capable and lethal warship it has ever operated,” Mr Evans said.