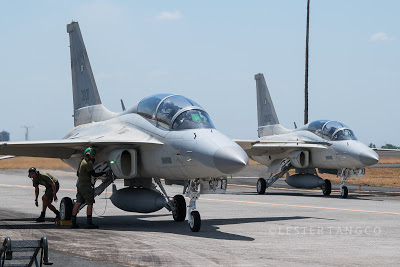 MANILA (PNA) — Pending the arrival of new security threats, there are no plans so far to acquire additional units of the Korea Aerospace Industries (KAI)-made FA-50PH “Fighting Eagle,” of which four units are now in service and another eight expected to arrive this year.

This was disclosed by Defense Secretary Delfin Lorenzana Tuesday when asked on whether they have plans to acquire additional units of the Mach 1.5 capable jet fighters for the Philippine Air Force (PAF).

“(There are) no plans to get more that the 12 we ordered. Four are already delivered (as of this posting), the other eight will be delivered this year,” he added in a message to the PNA.

During the time of then Defense Secretary Voltaire Gazmin, a study was made on the feasibility to acquire additional six FA-50PHs units to further secure the country’s airspace.

With Lorenzana’s statement, it seems that the PAF will have to content with the 12 FA-50PHs until Horizon 2 of the Armed Forces of the Philippines Modernization Program, which is to start this 2018 and end on 2022, before they can acquire more advance and sophisticated jet aircraft.

The FA-50PHs landed recently landed in the headlines after it participated during a surgical air and artillery strike that severely wounded Abu Sayyaf commander Isnilon Hapilon and seven others aside from killing an estimated 15 terrorists during a military offensive in Butig, Lanao Del Sur last Jan. 26.

It was the first combat mission for the above-mentioned aircraft, military leaders said.

It will act as the country’s interim fighter until the Philippines get enough experience of operating fast jet assets and money to fund the acquisition of more capable fighter aircraft.

The FA-50PH design is largely derived from the F-16 “Fighting Falcon”, and they have many similarities: use of a single engine, speed, size, cost, and the range of weapons.

KAI’s previous engineering experience in license-producing the KF-16 was a starting point for the development of the FA-50PHs.