Spyder Missiles have been Deployed 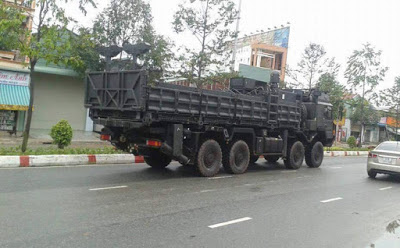 Spyder missile of the Vietnam (all photos : MAN motors)

In 2016, 377 Division 377 has successfully completed the training, live firing and acceptance, receiving missile deployment Spyder, according to Colonel Vu Jade Emperor, the Deputy Political Commissar of the Division.

The information was confirmed in the article “A number of measures to strengthen the discipline in the Air Defense Division 377” of Colonel Vu Jade Emperor, the Deputy Political Commissar of 377 Division published in national defense 2/2017 of January.

So this is the first time a military unit official information about the consortium received the first Spyder missiles under the contract signed with the Israeli side. Earlier, Lieutenant General Le Huy Bay – Commander of the Air PK-KQ also confirmed that Vietnam has ordered missile Spyder.

According to data in the report “Transforming the world of weapons” by the Institute for the Stockholm International Peace published recently, Vietnam has ordered 5 antiaircraft missile complexes Spyder-MR midrange under a contract signed 2015 and as of the moment they are the only one combination is transferred to Vietnam.

Consortium has the ability to kill the target aircraft types including fighters, helicopters, unmanned aircraft, cruise missiles and munitions have been fired from the other controls in an environment away from institutional pressure powerful electronics. Vietnam the Spyder missile purchase is not merely to replace the missile S-75 Volga (SAM-2) was old but also a major breakthrough on the force, strengthening the firepower to against any threat from the air, catch up with the advanced level of technology of the world.

The units, which is equipped?

According to Colonel Vu Ngoc Hoang, deputy political commissar of Division 377, in 2016, the Division successfully completed the task, there are many tasks successfully completed, such as:
“Training, live firing and acceptance, receiving missile deployment Spyder; host and participate in team combat maneuvers by the missile C125M Air Defence – Air Force held the first prize; the unit participate in live fire exercises were achieving Proficient flak. “

Although the article did not elaborate on the training, live firing rockets Spyder acceptance but more likely where the work is being done in your country to fight Israel where the first team of Vietnam for transfer students line type this new generation missile.

Maybe each team fighting was practiced in schools reporter 2-3 shot rounds of Israel to evaluate training results and acceptance prior to sealing ammunition, moved onto the ship repatriated. “Complete Excellence” certainly means that kill target right from the first rounds, the traditional right of the opening game defeat PK-KQ Vietnam team. Reportedly, 377 Air Defense Division is tasked with combat readiness, management and protection of the airspace south central and Spratly islands of the country and are now on the payroll of the only Division 1 medium hero of People’s Armed forces missile regiment, the Regiment were 274 – Doan Hung Vuong missiles.

This is also a very special unit – the only missile regiment of the Air PK-KQ equipped mix of 2 missiles S-75 and S-125 Pechora Volga (SAM-3).

Earlier, Division 377 are also equipped with radar complex visual realm ELM-2288ER round of Israel, is acting as gods eye, watching all the static aerial.

SPYDER about this, combined with modern radar would be enormous advantages for this duo can connect with each other perfectly, doubly powerful private rooms in South Central region, up an air defense network modern, safety Cam Ranh – conjugate base is especially important before any threats.

Thus forces the surface ships, submarines, naval reviews can rest assured the implementation of its key tasks is trained and ready to fight protect and assist island.