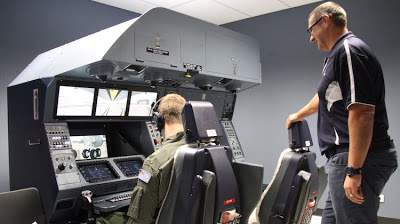 RAAF KC-30A pilot and air refuelling officer training should stabilise in 2017 as the tanker transport approaches full operating capability (FOC) and the first of two additional aircraft enters service later in the year.

“There was a sudden ramp up in 2013 with the aircraft here in country,” CAE Australia’s Amberley training centre manager Ben Gage told media ahead of the Avalon Airshow on Thursday.

Then in 2014 KC-30 aircrew training in fact tapered off as KC-30s underwent upgrades.

“At that stage the Air Force had enough crews to meet the number of aircraft they had to keep airborne,” Gage said.

“But then along came Operation Okra, the efforts that were required to go and support operations in the Middle East kicked off and the training ramped right up because not only were they doing the local type of missions there was also now a requirement to have crews positioned overseas.”

33 Squadron has had a single KC-30A on deployment in the Middle East supporting coalition campaign against Islamic State in Iraq (and more recently Syria) since October 2014.

“Credit to the squadron that they battled through that program, Air Force got the people in, our training went up, we started doing six students per course. That does put a training load burden on but we all worked together as a team across the platform and we got those aircrews happening,” Gage said.

CAE provides the training with five, and soon to be six instructor pilots and three ARO instructors. The instructors mostly have military backgrounds and while now civilians they must meet RAAF Central Flying School standards.

“For us now with the expansion of the fleet, coming out of 2016 into 2017 [with] the two new aircraft are arriving, in consultation with the commanding officer of 33 Squadron [we expect] slight increases but it is [now] about managing that throughput,” Gage said.

Conversion training for both pilots and AROs runs for six months, and pilots will typically graduate from the centre with 70 hours flying time in the FMS full-motion simulator, explained 33SQN commanding officer Wing Commander Brent Taylor.

Once a student has successfully completed the qualification flights they will be rated as a ‘D cat’ co-pilot.

“They’re in the right hand seat as a co-pilot for about nine months, and then after that across the board it’s ‘seat agile’.”

The squadron is expecting to take delivery of its sixth KC-30A in the second half of the year while a seventh airframe, which is expected to feature a government transport/VIP interior, is due to be handed over in early 2019.

In the meantime KC-30A FOC is due to be declared in the coming months said WGCDR Taylor.

“We’re nearly there, I sure that will come out in the near future.”