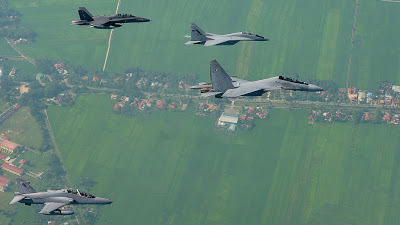 MELBOURNE, Australia — Malaysia’s military continues to struggle to implement plans to recapitalize its assets, as the government’s budget is battered by slow economic growth mainly due to falling oil revenues.

As a result, major procurement programs for the Malaysian Armed Forces have mostly been put on hold even as existing platforms rapidly approach obsolescence. For the Royal Malaysian Air Force, this means that badly needed fighters, trainers, helicopters and maritime patrol aircraft will unlikely be acquired in the short to medium term.

Situated alongside the vital maritime trade routes and the hotly disputed islands of the South China Sea of which it partly claims, Malaysia faces a unique geographical challenge, as its territory is split by the South China Sea into two separate landmasses 365 miles apart at its narrowest point.

This has had the effect of spreading the RMAF thinner, with the service recently moving a squadron of BAE Hawk 108/208 light attack aircraft to eastern Malaysia in response to continuing unrest and lawlessness in neighboring southern Philippines. This has spilled over into Malaysia on a number of occasions in the form of kidnappings and even an armed insurrection in 2013 that necessitated a military operation, including airstrikes by RMAF aircraft, to it put down.

The budget includes $104 million to the RMAF for procurement, but as Malaysian defense analyst Dzirhan Mahadzir told Defense News, this will be used to pay for ongoing programs rather than new acquisitions.

This will include the first delivery of an eventual total of six MD 530G armed scout helicopters by MD Helicopters planned for the end of 2017. Malaysia’s defense minister, Hishammuddin Hussein, has confirmed the program will go ahead, with the helicopters assigned to Malaysia’s Eastern Sabah Security Command and based at the eastern state of Sabah on the island of Borneo.

The ongoing upgrades to various RMAF platforms will also continue, with contracts for upgrades to the Hawks, Lockheed Martin C-130H Hercules airlifters and Sikorsky S-61 Nuri helicopters expected to be signed this year. Malaysian aerospace company Airod is expected to perform the upgrade in conjunction with a foreign partner.

The details and requirements of the Hawk upgrade have yet to be released, but both the C-130Hs and S-61s will require cockpit and avionics upgrades. Airlift is one area where Malaysia is well-equipped, with deliveries of four Airbus A400M strategic airlifters completed with the delivery of the last aircraft. These will join 15 C-130Hs and seven Airtech CN-235 transports already in the RMAF inventory.

However, the RMAF’s major procurement programs still remain unfunded and look to be the case for a while yet. Malaysia is seeking a multirole combat aircraft, or MRCA, to replace the survivors of 18 MiG-29N/NUB Fulcrums acquired in the mid-1990s, with the Dassault Rafale, Eurofighter Typhoon, Boeing F/A-18E/F Super Hornet and Saab JAS-39 Gripen having all been touted for the MRCA program, with the first two believed to be the preferred choice.

Malaysia’s budgetary constraints have, however, contributed to a stalling of the MRCA competition, although Saab is still marketing the Gripen in Malaysia, believing it is offering the best solution to a budget-conscious customer. In the meantime, a handful of MiG-29s continue in service, although Defense News understands their flying hours are carefully conserved in an effort to preserve airframe life.

The RMAF currently flies 18 Sukhoi Su-30MKM Flankers alongside eight older F/A-18D Hornets as its primary combat aircraft. And although these remain capable aircraft, Malaysia needs more front-line fighters to be able to properly defend its airspace along with other platforms outlined at the beginning of this piece.

However, the medium-term outlook for increased Malaysian defense spending is poor at best, and the longer its aging assets soldier on without replacement, the harder the country will need to work to get back “on the curve” when the times comes.