Bandung – Riding on a 40-year long established partnership, Airbus Helicopters and PT Dirgantara Indonesia (PTDI) bolstered their industrial co-operation to include support and services dedicated for the helicopter fleet of the Indonesian government.

Under this agreement, Airbus Helicopters and PTDI will jointly develop local support and services capabilities which cover maintenance, repair and overhaul specifically for the growing Airbus Helicopters fleet operated by the Indonesian government. “Indonesia plays an extremely important role in Airbus Helicopters’ global industrial footprint, and this expanded co-operation with our long-standing trusted partner speaks of our continued commitment to invest into Indonesia’s aerospace industry,” said Guillaume Faury, CEO of Airbus Helicopters. “We are happy to see the ‘Made-in-Indonesia’ initiative taking root as we strengthen our support for the Indonesian government.”

“PTDI is excited to embark on this new journey with Airbus Helicopters, which now enables us to offer a complete value chain in Indonesia, for the Indonesian Armed Forces,” said Budi Santoso, CEO and President of PT Dirgantara Indonesia. “We are also happy to be part of a strengthened alliance, which would help develop Indonesia’s technical competency in helicopter maintenance.”

This joint agreement is the result of a memorandum of understanding (MoU) signed two years ago. Numerous progresses were made following the MoU signing, which saw to major maintenance activities successfully completed in Indonesia for the Presidential Super Puma aircraft, with dedicated support from Airbus Helicopters in Indonesia. 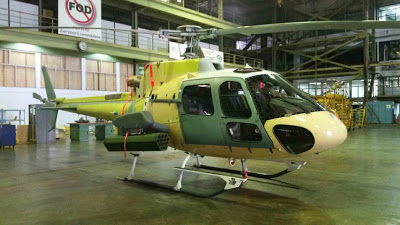 Over these two years, PTDI has implemented a robust re-organisation of their processes to consolidate all support and services activities under one single roof. The Indonesian industrial partner will also be recognised as Airbus Helicopters’ approved completion centre and services centre, upon successfully passing quality and safety audits.

The decades-long partnership between Airbus Helicopters and PTDI began in the 1970s, with PTDI’s licensed production of the NBO-105 helicopter. Today, both companies are working together on 11 different helicopter types, namely the H225M, H215M, AS565 MBe Panther, AS365 N3+, H135, the Fennec (AS550, AS555 and AS350), as well as the legacy platforms NAS330, NSP332 and NBO-105, for the Indonesian Presidential fleet, the Indonesian air force, army, navy, police forces, Basarnas and the STPI training centre; supporting a wide range of operational missions.