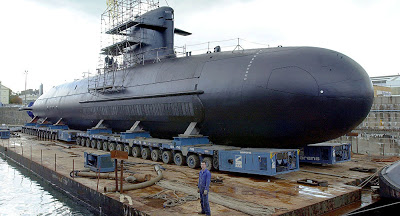 “The memorandum of understanding (MoU) covers the extension of an existing agreement (which expired in December 2016) between PT PAL and DCNS on an industrial cooperation with a view to an Indonesian acquisition of submarines,” the Elysée office said March 29.

The agreement was among those signed during a visit to Jakarta by the French head of state, François Hollande. DCNS Chairman Hervé Guillou and PT Pal director Firmansyah Arifin signed the memorandum.

“Indonesia wants to reinforce its naval capacity and is discussing with France to explore projects of submarine and surface ships to be built in Indonesia with a high level of local industrial content, through Indonesian-French long-term cooperation,” the company said in a March 30 statement.

The French and Indonesian companies have been studying over the past few years an industrial plan based on a multipurpose, latest-generation version of the Scorpene submarine, capable of shallow and blue water missions, DCNS said.

“Other opportunities on corvettes and frigates are going to be assessed in the near future,” the company said.
“DCNS is committed to establishing long-term partnerships with the Indonesian industry to enhance Indonesia’s local high-tech industrial content,” Guillou said in a statement.
Indonesia seeks to build up a submarine fleet, having in 2012 placed a $1 billion order for three South Korean attack submarines, with the first built in South Korea with on-site Indonesian engineers; part of the second built in Indonesia; and the third built by the state company PAL in the Indonesian port city of Surabaya.
The Indonesian Navy sought a fleet of at least 10 submarines and later revised the count to 12, according to a Dec. 5, 2015, report from Singapore-based S. Rajaratnam School of International Studies. That planned increased is part of Indonesia’s Minimum Essential Force program, which runs to 2024 and seeks to boost naval capabilities.
“Without a proper strategic guideline it will be difficult for the country to establish a coherent procurement plan,” said the report, titled “Indonesia’s Submarines Procurement Plan: Spearheading Jakarta’s Maritime Ambition?”
There were problems in joint production of the South Korean submarine between PT PAL and Daewoo Shipbuilding & Marine Engineering, with a “bitter lesson of the sluggish pace of technology transfer due to limited capability to absorb the transferred knowledge and the vendor’s reluctance to transfer it,” the report said.
There are also training concerns to address, as the Indonesian Navy’s two submarines present limited availability for training, the report said.
Separately, Indonesia ordered from Nexter last month a further 18 Caesar 155mm artillery, adding to the 2012 order for 36 units. The latest order included the Findart firing control system, training simulators and more than 50 artillery battalion auxiliary vehicles, to be locally assembled by the partner PT. Pindad.
(DefenseNews)