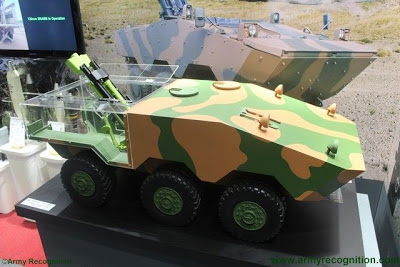 As Brazilian Army started receiving its first batches of VBTP-MR Guarani 6×6 armored vehicles, defence companies are already eying future variants. Among other is the mortar carrier version, for which the Singapore-based company ST Kinetics is proposing its 120 mm Super Rapid Advanced Mortar System.

ST Kinetics’ 120 mm SRAMS achieves the highest continuous firing rate of up to 18 rounds per minute and is also the only system in the world with a recoil of less than 20 tonnes, enabling operations even from onboard a 4 x 4 wheeled vehicle.

Singapore Technologies Kinetics’ (ST Kinetics) has developed the world’s first 120 mm Super Rapid Advanced Mortar System (120 SRAMS) that is able to achieve the highest continuous firing rate of up to 18 rounds per minute. This state-of-the-art, technologically advanced weapon system has been developed specifically for rapid and close range requirements of the battlefield.

With new innovative features that are patented, the 120 SRAMS provides a multiplier effect in operations ­ having to equip current mortar batteries with less weapon systems to bring about the same amount of lethality.

Compared to existing mortar systems which can only fire up to six rounds per minute, ST Kinetics’ 120 SRAMS achieves a high sustained rate of fire with its semi-automatic Ammunition Transfer System and a patented Valve System in the breech mechanism. This provides an effective vent for the trapped air, resulting in a “free-fall” of the bomb into the barrel. This signficantly reduces the projectile’s in-bore travel, thereby allowing it to achieve the highest continuous firing rate of up to 18 rounds per minute.

Another feature of ST Kinetics’ 120 SRAMS is its patented Cooling System, which reduces temperature build up thereby enabling continuous firing at a maximum rate.