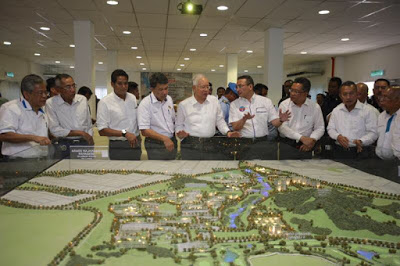 The Sendayan air base in Negeri Sembilan (photo : Hishamuddin)

KUALA LUMPUR (Bernama) – The Sendayan air base in Negeri Sembilan, which is now in the final stage of construction will be the largest professional training centre for officers and men of the Royal Malaysian Air Force (RMAF) in the country.

The facility located on a 303.5 hectare site, 12km from Seremban, however does not have a runway as it will not be involved in any flight operation.

The air base which is expected to be completed by year-end is part of the restructuring programme of the Kuala Lumpur air base in Sungai Besi here which would in turn, be developed as Bandar Malaysia.

“The facilities in Sendayan air base will ensure a more centralised approach to all RMAF professional training,” he told Bernama in an interview here.

The air base which began contruction in 2013 will house professional training for RMAF personnel in logistics, administration and management.

Ramli said the Sendayan air base was three times larger than the Kuala Lumpur site and equipped with the most modern facilities in line with the national modernisation of RMAF. Compared to the base in Kuala Lumpur which can only accommodate 250 units of quarters, the Sendayan site will have 693 housing units of various categories, including bungalow, semi-detached and apartments for officers and other personnel.

“RMAF hopes to provide a better quality of life for its staff and families with the improved quarters.

“The air base can accommodate almost 700 officers and personnel of other ranks and with their families, the number of people living there could reach 1,300,” said Ramli.

On the restructuring of flight operation assets from the Kuala Lumpur base, he said the assets had been transferred to four air bases, namely in Subang, Kuantan, Gong Kedak and Butterworth.

The exercise was conducted in stages by Perbadanan Perwira Harta Malaysia (PPHM), a wholly-owned subsidiary of the Armed Forces Fund Board (LTAT).

PPHM was involved in developing eight sites for the relocation of the Kuala Lumpur air base to upgrade facilities and modernise assets, as well as the development of national defence.

Prime Minister Datuk Seri Najib Tun Razak is scheduled to visit the Sendayan air base tomorrow to look at the development and progress of the air base project.