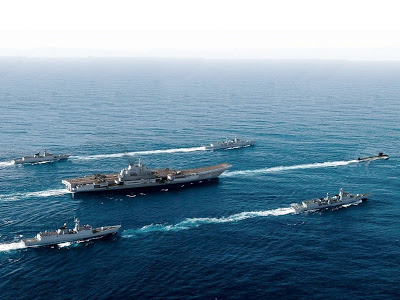 “In the long run, China needs to develop its own aircraft carrier battle teams, with at least six aircraft carriers, maritime forces led by guided missile destroyers, as well as attack submarines,” said Xu Guangyu, a senior advisor to the China Arms Control and Disarmament Association. “China will build about ten more bases for the [carriers] . . . Hopefully, China could have bases in every continent, but that depends on countries which would like to cooperate with China.”

The PLA Daily said that the purpose of the enlarged carrier fleet would be to enable the PLA(N) to “break through” the first island chain (Japan, Taiwan and the Philippines) to exert its power in the Western Pacific.

The PLA(N) now has about a dozen fighter pilots trained to operate from the deck of its sole flat-top, the Soviet-built ski jump carrier Liaoning. It will soon take delivery of a second, similar carrier built by CSIC. A newer design for future hulls, the Type 002, is reportedly patterned on American carrier layouts.

China is already building its first-ever overseas military base, a “support facility” in Djibouti, and it is also funding the construction of new seaports at Gwadar, Pakistan and Hambantota, Sri Lanka. While Hambantota is a commercial venture, Pakistani officials originally proposed the port at Gwadar as a naval base, and China is providing military assistance to guard it from a local insurgency.

The three facilities are at the core of Chinese President Xi Jinping’s 21st Century Maritime Silk Road, the seagoing component of his government’s multi-billion-dollar “Belt and Road” project to connect China with markets to the west. In comments Thursday, Xi promised to “promote China’s great opening up and development under the ‘Belt and Road’ framework.”