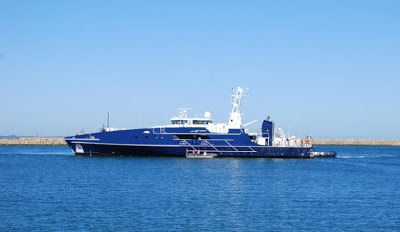 Austal (ASX:ASB) is pleased to advise that the first of two Cape-class Patrol Boats for the Royal Australian Navy, the Australian Defence Vessel (ADV) Cape Fourcroy, has been delivered from the company’s Henderson shipyard in Western Australia.

The two 58 metre patrol vessels are to be chartered by the Commonwealth of Australia on behalf of the Royal Australian Navy, which awarded the A$63 million contract to Austal in December 2015.

“This latest Cape-class, for the Royal Australian Navy, further strengthens Austal’s position as the only patrol boat designer and builder in Australia and a major world class exporter for this class of vessels. The delivery of the Cape Class vessel clearly shows Austal’s unrivalled ability to design and construct defence vessels on-time and on-budget,” Mr. Singleton said.

“Austal has been building patrol boats for over 20 years and we look forward to more work in the future. This includes the opportunity to design and build 12 new Offshore Patrol Vessels for the Australian Navy with our design partner Fassmer in a continuous shipbuilding initiative being driven by the Government,” he said.

Austal currently has an order book of 20 patrol vessels to be delivered over the next 4 years and has successfully competed in a number of overseas markets. Austal is currently proposing variations of its Bay Class, Cape Class and Guardian Class Patrol Boats for customers in the Middle East and Asia and expects this activity to bring further construction work to Australia. Mr Singleton said, “Exports derived from national defence programs show the multiplier effect on creating jobs out of Austal’s strong and hard won reputation in overseas markets”.