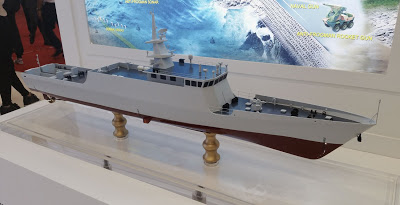 Malaysia signed a contract on 21 April for the purchase of an initial four littoral mission ships (LMSs) from China for the Royal Malaysian Navy (RMN).

The agreement, which is part of a comprehensive strategic partnership between the two countries, was signed in Beijing by the China Shipbuilding Industry Corporation (CSIC) and Malaysia’s Boustead Naval Shipyard (BNS) in a ceremony overseen by Chinese defence minister Chang Wanquan and his Malaysian counterpart, Hishammuddin Hussein.

Malaysia’s LMS programme is subsequently expected to expand, with BNS constructing up to 14 additional LMSs under licence to replace several classes of ship operated by the RMN as part of the service’s ’15-to-5 transformation programme’.

The RMN aims to increase the number of ships in service, while consolidating its fleet of 15 ship classes into five to reduce its dependence on single-mission vessels.