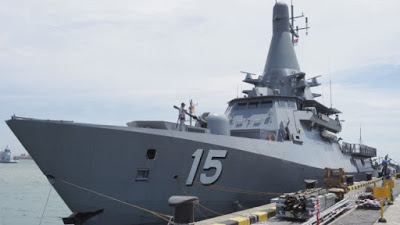 The Republic of Singapore Navy is set to commission the first littoral mission vessel RSS Independence on its 50th anniversary on May 5.

“This will be a significant moment to mark the Navy’s coming of age at 50 years, as we complete our 3rd generation transformation, as we move into our redesign for LMV Indy to be the lead platform, to be, if I can borrow the phrase, the ‘flagship of our future Navy’,” Republic of Singapore Navy chief, Rear-Admiral (RADM) Lai Chung Han, said in May, last year.

RSS Independence, the first of eight littoral mission vessels finished sea trials and arrived at her homeport at Tuas Naval Base on May 26, 2016.

RSS Independence over the years – from the PC (background) to PV (centre) to LMV. (photo : Sing MoD)

Littoral mission vessels are being built to replace the 20-year-old Fearless-class patrol vessels which the Singapore Navy started to gradually decommission.

The eight vessels are being built by ST Marine under a contract signed with Singapore’s ministry of defense in 2013.

The LMVs will be configurable to undertake a wide spectrum of operations. More than twice the size of the current class of patrol vessels in service with the Republic of Singapore Navy, LMVs measure 80 meters in length and displace 1,250 tonnes. All eight vessels are expected to be operational by 2020.

ST Marine most recently held a launching ceremony for the fourth vessel in the class, the future RSS Justice, on March 18, 2017.