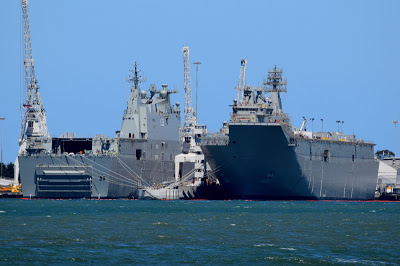 Propulsion problems on two new warships which cost taxpayers $3 billion could be the consequence of fundamental design flaws, navy chiefs have revealed, as they confirmed at least one of the vessels will miss major drills with the US next month.

One of the two ships, the HMAS Adelaide, has been dry-docked at Garden Island in Sydney Harbour so naval engineers and the manufacturers can open up the propeller system and examine whether the problems are as simple as parts being poorly fitted or something deeper.


Chief of Navy Tim Barrett and Rear Admiral Adam Grunsell, head of maritime systems at Defence’s capability and sustainment group, acknowledged there could be a design problem, though they stressed it was still being investigated.

Such a fundamental problem would raise the likelihood the ship’s overseas manufacturers would bear the cost under warranty.


“Am I disappointed? Yes. We were not expecting to find this,”  Vice Admiral Barrett said in a briefing in Canberra on Friday.

What is known is that oils have seeped into sections in which they don’t belong within the external propulsion pods that drive and steer the ship. In the Adelaide, metal particles have also been found in the oil.


The findings appear to indicate that problems with seals have allowed oils to move around. Different parts of the system use different types of oil of varying thickness.

This in turn may have caused bearings to be worn which could have produced the metal particles in the oil in the Adelaide. 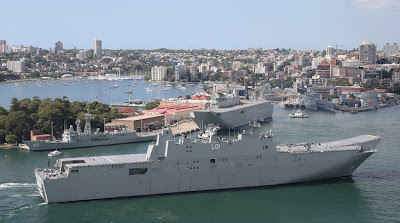 Rear Admiral Grunsell said: “The three companies themselves are looking very closely and working very closely on the detail because they want to understand what caused this as well. It may well be a design issue.”

Spain’s armada has a ship of the same design, the Juan Carlos I. It has had problems but not of the same nature. Despite being commissioned in 2010, it has done less sea time than the newer Canberra or Adelaide, Vice Admiral Barrett said.

This appears to leave open the possibility that the ship cannot actually perform at the level the manufacturers stated. Vice Admiral Barrett acknowledged this possibility, as well as that there were basic design or engineering problems.

“All of those aspects are part of what we’re considering at the moment,” he said. “Until we’ve done this work, we’re not in a position to be able to say that and I would not speculate on any of those outcomes but clearly in root cause analysis you have to consider all of those options.”

HMAS Canberra meanwhile has been taken to sea to do further tests. Vice Admiral Barrett confirmed the Adelaide would miss Exercise Talisman Sabre with the US starting in late June, though he was still hopeful the Canberra could take part.


On the question of who bears the cost, Vice Admiral Barrett said: “If we have to change our requirement because of what we’ve discovered here … then clearly whether that becomes a warranty issue or something that the Commonwealth has to live with, that’s the bit that I am sensitive about saying too much because that would be a piece that the Commonwealth would choose to take up at a later stage.”