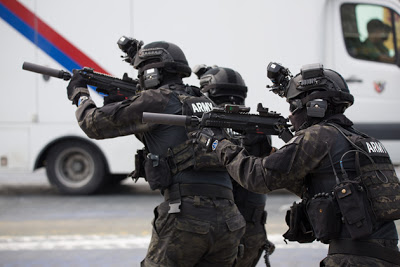 The Special Operations Task Force (SOTF) of the Singapore Armed Forces has inducted a series of new personal equipment and firearms.

A notable additional is the Heckler & Koch (HK) MP7 personal defence weapon, which was carried on SOTF operatives conducting a parachute insertion into the Army Open House show site from 27-29 May.

SOTF examples of the MP7 were seen with a silencer and an EOTech or Trijicon red-dot sight mounted on a Picatinny rail.

Shephard understands that the MP7 was inducted by the SOTF in the last 1-2 years, although they also use the FN Herstal P90 depending on the type of operations. The unit also prefers the HK416 assault rifle, which comes in 10-inch and 14-inch barrel versions, and the smaller-calibre FN Five-SeveN as its sidearm.

ST Kinetics has also developed a Compact Personal Weapon, with conversions for either 9mm, 5.7mm or 4.6mm rounds. Shephard understands that the weapon is currently under production.

This is the first time the SOTF had showcased deployment via parachute insertion in tactical gear. Also of interest are new black camouflage coveralls, which are different to the black tactical uniform seen in most units.
Other accessories seen on SOTF operatives were Thales Angenieux night-vision goggles.

Singapore’s SOTF is a combination of the army’s Commandos, Special Operation Force and the navy’s Naval Diving Unit. It was formed in 2009 to meet the full spectrum of terrorist threats.

Usually kept under wraps, the SOTF has been active in many events in recent years to provide the public with greater confidence against potential threats.