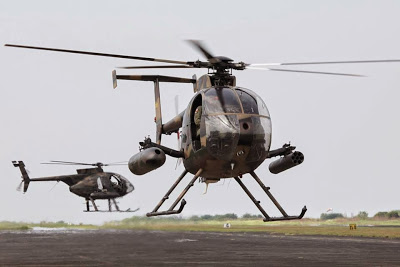 MANILA — The Philippine Air Force (PAF), through its Bids and Awards Committee, is looking for suppliers capable of supplying it with spare parts needed for the maintenance of the airframe systems of five of its McDonnell Douglas MG-520 “Defender” attack helicopters.

Some of the MG-520s are currently being used in the ongoing clearing operations against remnants of the Maute Group terrorists still holed up in Marawi City, Lanao Del Sur.

The PAF is known to operate between 12 to 16 models of the MG-520, according to military sources.

The PAF affair with the MG-520 started in the early 90’s when 25 units of these excellent aircraft were delivered to country.

It was used with great effect against New People’s Army (NPA) rebels and lawless elements like the Abu Sayyaf Group for the past few years.

The MG-520 is derived from the MG-500 light utility helicopter.

It can be armed with .50 caliber heavy machines and air-to-ground rockets.