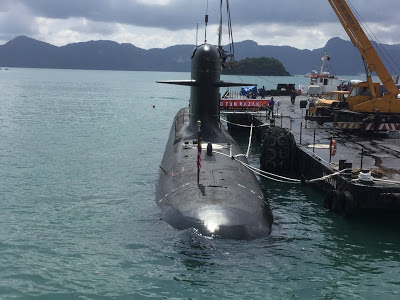 BDNC is 60% owned by BHIC Defence Technologies Sdn Bhd, a wholly owned subsidiary of BHIC, and the rest is held by France’s DCNS SA.

BHIC told Bursa Malaysia that it received a letter from the ministry claiming liquidated damages amounting to RM53.2 million and €19.3 million (RM94.5 million), being 10% of the total contract value.

The submarines service support deal was awarded to BDNC on Aug 12, 2010 for a total contract value of €193 million and RM532 million. It included a full submarine integrated logistics support package, consisting of a comprehensive spare parts package as well as the outfitting of workshop equipment, respective yard facilities and equipment, submarine safety conditioning facilities and their corresponding maintenance.

The contract also covered tugboat services and the operation and maintenance of the shiplift, transfer system and submarine “umbilical services”.

BHIC said BDNC is responding to the letter of claim and has adequate basis to defend itself and appeal against the claim, which is expected to have a material financial and operational impact on the BHIC Group for the financial year ending Dec 31, 2017.