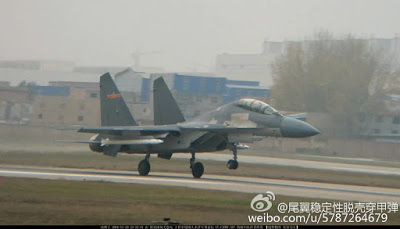 The J-16 carries two VLRAAM for a test firing. The VLRAAM is one of the world’s largest air to air missiles. Its other advanced features include an AESA radar, a infrared/electro-optical seeker (under the yellow-orange cover on the forward section above the nosecone), and satellite navigation midcourse correction. (all photos : cjbdy)

China is Testing a New Very Long Range Air to Air Missile that could Thwart U.S. Plans for Air Warfare

Looking at takeoff photos, we estimate the missile is about 28 percent of the length of the J-16, which measures 22 meters (about 72 feet). The puts the missile at about 19 feet (5.8 m), and roughly 13 inches (33 cm) in diameter. The missile appears to have four tailfins. Reports are that the size would put into the category of a very long range air to air missile (VLRAAM) with ranges exceeding 300 km (roughly 186 miles), likely max out between 250 and 310 miles. (As a point of comparison, the smaller 13.8-foot, 15-inch-diameter Russian R-37 missile has a 249-mile range).

This is a big deal: this missile would easily outrange any American (or other NATO) air-to-air missile. Additionally, the VLRAAM’s powerful rocket engine will push it to Mach 6 speeds, which will increase the no escape zone (NEZ), that is the area where a target cannot outrun the missile, against even supersonic targets like stealth fighters. 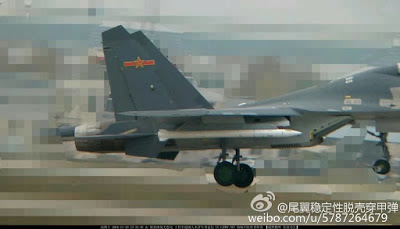 The new, larger missile’s added value is not just in range. Another key feature: its large active electronically scanned (AESA) radar, which is used in the terminal phase of flight to lock onto the target. The AESA radar’s large size—about 300-400% larger than that of most long range air-to-air missiles—and digital adaptability makes it highly effective against distant and stealthy targets, and resilient against electronic countermeasures like jamming and spoofing.

The VLRAAM’s backup sensor is a infrared/electro-optical seeker that can identify and hone in on high-value targets like aerial tankers and airborne early warning and control (AEW&C) radar aircraft. The VLRAAM also uses lateral thrusters built into the rear for improving its terminal phase maneuverability when engaging agile targets like fighters.

Interestingly, the ability to glide may be a key feature as well. A 2016 research paper by Zhang Hongyuan, Zheng Yuejing, and Shi Xiaorong of Beijing Institute of Control and Electronics Technology linked to the VLRAAM development suggests that the midcourse portion of the VLRAAM’s flight will occur at altitudes above 30 km (about 18.6 miles). Flying at such low pressure, low drag high altitudes would allow the VLRAAM to extend its range (similar to hypersonic gliders). The high altitude also makes it difficult for enemy aircraft and air defenses to shoot it down midflight. Finally, high altitude flight means that the VLRAAM would have a high angle of attack against lower flying targets, which reduces the response time for enemy evasive action.

Another researched VLRAAM function is datalinking; the papers called for the VLRAAM to be embedded within a highly integrated combat networks. It is envisioned as just part of a larger wave of networked solutions aggregated through multiple Chinese systems. For example, a J-20 stealth fighter wouldn’t mount the missile (the VLRAAM is too large to fit in the J-20’s weapons bay), but could use its low observable features to fly relatively close in order to detect enemy assets like AEW&C aircraft (which are vital to gather battlespace data for manned and unmanned assets, but subsonic in speed and less able to evade missiles). Then before breaking off contact, the J-20 would signal a J-16 400 km (249 miles) away (outside the range of most air to air missiles) providing it the data needed to launch the VLRAAM at the target. This would offer China a longer range version of present U.S. tactics that involve using the fifth generation F-22 as a sensor for 4th generation fighters as the “shooters.”

The gains in range and speed of the VLRAAM pose another significant risk to the concepts of the U.S. military’s “Third Offset.” U.S. operations are highly dependent on assets like aerial tankers, dedicated electronic warfare aircraft, and AEW&C. For example, without aerial tankers, the relatively short range of the F-35s would become even more of a liability in long range operations in the South China Seas and Taiwan Straits. Similarly, without AEW&C aircraft, F-22s would have to use onboard radars more, raising their risk of detection. Even for stealthy tanker platforms like the planned MQ-25 Stingray drone and proposed KC-Z tanker will be vulnerable to VLRAAMs if detected by emerging dedicated anti-stealth systems such as the Divine Eagle drone and Yuanmeng airship.

By pushing the Chinese air defense threat bubble hundreds of miles out further, they also offer to turn the long range tables on the putative U.S. “Arsenal” Plane concept, a Pentagon plan to launch missiles from non-stealthy planes from afar. In sum, VLRAAM is not just a big missile, but a potential big deal for the future of air warfare.