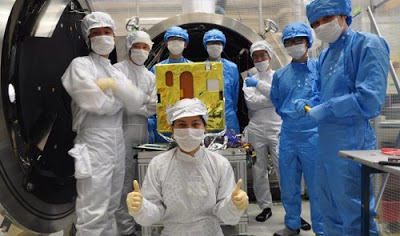 Vietnam is set to launch two radar satellites in 2019 and 2022, marking the country’s major advancement in space technology.

The two satellites will be Vietnam’s first to employ radar technology which allows for higher-resolution image capturing in all weather conditions.

LOTUSat-1 and LOTUSat-2 are part of a US$600 million project to establish the Vietnam National Satellite Center (VNSC) in Cau Giay District, Hanoi, which will be the country’s biggest science and technology project.

Each of the satellites is designed to weigh 600 kilograms and to have an orbital lifetime of five years. They can capture images of objects on the earth surface measuring as small as one meter in size.

The satellites will be tasked with monitoring and giving out early warnings on weather hazards, as well as keeping track of fish migration at sea to aid Vietnam’s fishing industry, according to VNSC director Dr. Pham Anh Tuan.

Once launched, the satellites are expected to help save as much as $150 million a year in disaster-caused damage on the country’s crops, according to experts at the Japan International Cooperation Agency (JICA).

According to Dr. Tuan, LOTUSat-1 will be built primarily by Japanese engineers with the participation of their Vietnamese colleagues.

The satellite is currently up for contract bidding and is expected to be launched in March 2019.

Vietnam has already sent a team of 36 select space engineers to Japan for training and taking part in the building of LOTUSat-1.

The engineers will launch two small demo satellites named Micro Dragon and Nano Dragon next year as part of their training in preparation for the major projects to build Vietnam’s first radar satellites.

Up to 100 Vietnamese engineers will have been trained by the time LOTUSat-2 is built, Dr. Tuan said, adding that the second satellite will be made in Vietnam by local engineers under the supervision of foreign experts.

According to the VNSC director, Vietnam currently places in the middle among Southeast Asian nations in terms of space technology, and has never been able to build its own satellites before.

The ability of its engineers to build satellites will mark a significant step in its progress in the field, Tuan remarked.

Apart from building the two satellites, Vietnam will also be focusing on training quality personnel capable of running its satellite network in the near future.

The country successfully launched geostationary satellites Vinasat-1 and Vinasat-2 in 2008 and 2012, as well as sun-synchronous satellite VNREDSat-1 in 2013. The VNSC project also places particular emphasis on kindling the love for space among youths in the country with the scheduled establishment of an aerospace museum and two observatories.

The aerospace museum is part of the VNSC complex inside Hoa Lac Hi-Tech Park in Thach That District, Hanoi.

Its construction has already finished and the museum will be open to the public as early as 2018.

Meanwhile, two VND120 billion ($5.27 million) observatories are being constructed in Hanoi and Nha Trang, a popular beach city in the central region.

The observatory in Hanoi will be opened at the same time as the aerospace museum, while the one in Nha Trang will go into operation next March.