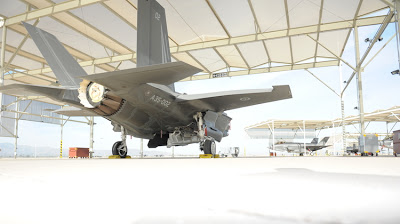 A35-002 at Luke Air Force Base prior to the weapons release. (photo : Lockheed Martin)

A Royal Australian Air Force F-35A has dropped a weapon for the first time after the aircraft was upgraded with its initial combat-capable software load.

Images dated December 13 and released on the Department of Defence’s website show F-35A A35-002 carrying a GBU-12 laser-guided bomb in its starboard side internal weapons bay.

“The 500lb Paveway II laser-guided bomb, the GBU-12, was the first weapon certified for release on Australian F-35A aircraft, following the recent upgrade of the aircraft with initial warfighting capability software,” caption information for the photos read, suggesting the aircraft has now been upgraded with the final Block 3i software load. A35-002 with its weapons bay open during the loading of the 500-pound Paveway II laser-guided bomb. (photo : Lockheed Martin)

A35-002 is one of the first two RAAF F-35As that are currently based at Luke Air Force Base, west of Phoenix. The aircraft were built with an earlier Block 3i software load which restricted them to an interim training and warfighting capability.

“Block 2B and 3i Final software development was completed in May 2016 with all fielded aircraft, including Australia’s two aircraft with 3i software, planned to be upgraded by the end this year,” F-35 Program Deputy Director Air Force Transition Office, Wing Commander Scott Woodland, said in May when the Block 3i Final software load was finalised.

“We are now one significant step closer to seeing our aircraft arrive in Australia with the next increment of software, the Block 3F capability,” WGCDR Woodland said in the May 16 statement.