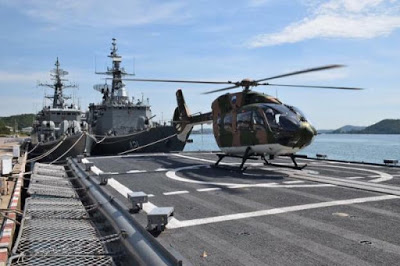 The Royal Thai Navy (RTN) has conducted a series of vertical replenishment (VERTREP) trials with its new H145M helicopter.

The trials, conducted throughout December 2016 with the service’s lead T 994-class coastal patrol craft, were conducted to prove out the range of operations that can be conducted with the newly inducted aircraft, said the service.

The RTN formally commissioned its H145M helicopters in early November 2016, although technical acceptance for the first two aircraft was completed in April the same year.

The service has also completed a series of deck landing trials with the helicopter on board its Endurance-class landing platform dock (LPD) platform, HTMS Angthong (791).