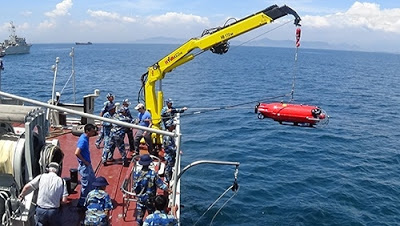 Can work 6 hours at a speed of 6 knots/h, the Navy UUV Pluto Plus Vietnam was rated the world’s leading modern.

In an interview with the newspaper in May 8/2016 Navy, Lieutenant Colonel Doan Bao Anh, head of Brigade 161 Brigade said the new unit is receiving Pluto Plus robot.

According to Lieutenant Colonel Britain, new units receiving robot Pluto Plus recently. This is the modern equipment and very expensive to have strict regulations in the operations manual, to the foreign experts also must be very careful. 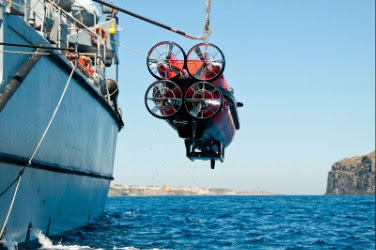 So, to master, to become proficient quickly equip, staff and soldiers actively research units and less than a month after the reception has successfully made this device model aimed training before cases reach the actual robot.

So equipped with the latest robot Vietnam Navy can accomplish what task? Pluto Plus is a means of unmanned underwater produced by Italy’s Electronics Group Gaymarine scan tasks for torpedoes.

Pluto Plus composed of magnetic materials with low and emits very little noise when in operation in order to avoid triggering the mines from the field type or sound, it can be controlled via a fiber optic cable or wireless connection while on duty.

According to the recommendation of the manufacturer, the battery of Pluto Plus can work from 2 to 6 hours at a speed of up to 6 knots/h. It is particularly according to the manufacturer’s in the world, only about 150 robots Pluto Plus is active in Navy payroll Italy, Norway. The UUV are also manufactured under license in the US by Columbia Group and exports to Egypt under a contract worth $ 10.6 million.

The Vietnam People’s Navy investment decisions Pluto Plus equipped robot to integrate onto the coastal minesweeper Sonya class or class minesweepers off Yurka is quite unexpected.