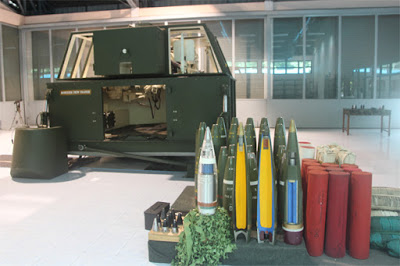 The Royal Thai Army (RTA) is an ardent user of Howitzer Crew Trainers (HCT) for its M109 crews, with their software upgraded to the latest version in 2015.

Delivered to the army’s Artillery Centre on 29 January 2003, Thailand acquired the HCTs from Van Halteren Defence in the Netherlands for a price of $2 million.

The HCT is an indoor simulator for the M109A5 155mm self-propelled howitzer, providing a realistic environment to train crews.

The HCT has three main parts. The first is the instructor station, a control section used to set training situations, and to correct, record and evaluate the results of each training session for debriefings.

The second part is the training station, a transparent compartment allowing instructors to view crews and training situations. It is arranged to mimic the interior of an M109A5 turret, and it features all the equipment needed by gunners.

The final part is the training ammunitions system, it features all ammunition types that are the same size and weight as real ammunition rounds. Gunners can select and use them in their training.

The HCTs offer the RTA artillery corps low-cost training for crews in a controllable and safe environment. It avoids the cost of live-fire training and commitment of all associated resources, plus it can be used any time.