PH to Get 30 Attack, Utility Copters this Year 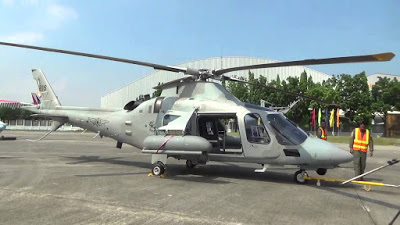 The Philippine Air Force (PAF) is expected to proceed the process of procuring 30 helicopters this year, sources on Thursday told MaxDefense Philippines.

MaxDefense, the military analyst, has posted on Facebook saying he believes the PAF’s target will be “AgustaWestland AW-109P armed helicopters and Bell 412EP combat utility helicopters.”


Based on information gathered from MaxDefense sources, the Philippine Air Force is expected to proceed the process of procuring 30 helicopters this year, which MaxDefense believes to be AgustaWestland AW-109P armed helicopters and Bell 412EP combat utility helicopters. This is in line with Pres. Duterte’s emphasis on beating internal security challenges during his term. Originally these helicopters are intended for acquisition under Horizon 2 phase but it appears to have been moved a year ahead, as 2017 is actually the last year of the AFP Modernization’s Horizon 1 phase. (Tankler)

MANILA, Jan. 14 (PNA) — The modernization of the Armed Forces of the Philippines (AFP) will continue under President Rodrigo Duterte, Defense Secretary Delfin Lorenzana has said.

The AFP Modernization Program, now on its Second Horizon, will continue as planned, he said.

The Second Horizon runs from 2018 to 2022 and will see the acquisition of equipment more attuned to external defense missions.

Lorenzana earlier said the AFP Modernization Program remains a priority of the new defense leadership as the program jibes with the Duterte administration’s plan to have a credible deterrence to secure Philippine territory, especially its maritime areas.

He said that while some projects may be fast-tracked to address criminality, terrorism and insurgency in the southern Philippines, the defense department will follow the plans laid for the AFP Modernization Program.