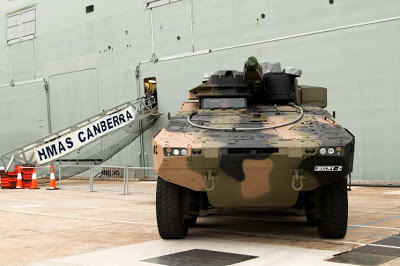 A Rheinmetall Boxer combat reconnaissance vehicle prior to being loaded onto the heavy vehicle deck of the Royal Australian Navy amphibious ship HMAS Canberra during a series of trials at Fleet Base East in Sydney on 6 December 2016. (all photos : RAN)

Armoured vehicles put to the test on Canberra

HMAS Canberra was introduced to the next generation of armoured fighting vehicles late last year, as part of Project Land 400 phase two trials.

The project will acquire and support the next generation of armoured fighting vehicles with the firepower, protection and mobility to defeat increasingly lethal and adaptive adversaries well into the future.

Phase two of the project seeks to identify a vehicle to provide a mounted combat reconnaissance capability, a replacement for the Australian light armoured vehicle.

Rheinmetall Defence has offered the Boxer multi-role armoured vehicle for test and evaluation. This vehicle is currently in production, with 300 already delivered to other customers in six variants.

BAE Systems Australia has teamed with Patria of Finland to offer the Patria armoured modular vehicle as a contender. This vehicle is in service with eight nations with more than 1500 vehicles delivered.

These two vehicles were loaded over Canberra’s side ramps into the heavy vehicle deck during the trial, where they were positioned to drive on board the ship’s landing craft.

The Project Manager Test and Evaluation of Land 400, Lieutenant Colonel Chris McKendry, said the trial was a success. 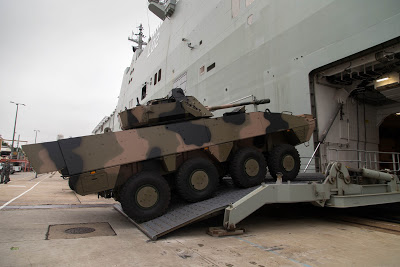 A BAE Systems Australia Patria AMV35 combat reconnaissance vehicle drives onto the heavy vehicle deck of the Royal Australian Navy amphibious ship HMAS Canberra during a series of trials at Fleet Base East in Sydney on 6 December 2016. (photo : RAN)

“The trial was conducted in order to meet some of the objectives of the phase two user evaluation,” he said.

“Specifically, this was to determine if the tendered vehicles can be deployed to all designated theatres.

“There is now the potential for some follow-on work with the amphibious assault ships in 2017 to confirm loads on the landing craft.”

Lieutenant Colonel McKendry said working with the crew of Canberra was very enjoyable.

“Maintaining regular communications with the ship’s amphibious department meant it all slipped into place on the day,” he said.

“These ships will provide the new combat vehicles with the ability to deploy into any theatre of operations the Australian Defence Force enters, providing a significant capability for deployed forces.”

The project will now continue the vehicle performance assessment at Monegeetta in Victoria before heading to Puckapunyal.

Royal Australian Armoured Corps soldiers will be trained on the operation of each vehicle in order to commence a four-month user evaluation.

Transportability testing for other strategic lift assets such as the Royal Australian Air Force’s C-17 is due to commence in mid-2017.

After all testing and evaluation, Defence will undertake a final evaluation of the tenderers’ proposals to develop the business cases for consideration by the government.