Indonesia Gets In Line For India’s New AEW&C Jet 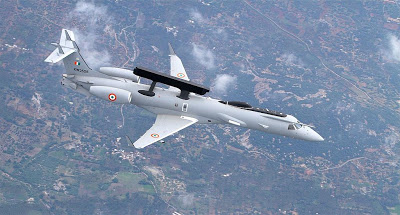 Indonesia could be the first foreign customer for the DRDO-Embraer AEW&C system, designated Netra, within the next year, if interest from Jakarta is anything to go by. Livefist learns Indonesia, which first expressed interest in the system, has escalated its interest to a request for a systems demonstration, possibly in that country. The project has achieved initial operational clearance, with the first of two jets set to be handed over to its customer, the Indian Air Force, at the Aero India show — a terrific splash of an idea.

India’s DRDO has been ordered to aggressively and proactively pitch the new DRDO-Embraer AEW&C jet platform to foreign customers at Aero India 2017. With 52 countries at the show, the project team will hopefully have its hands full. Livefist can confirm the DRDO has received foreign interest (beyond preliminary enquiries) from Brazil itself, Israel and South Africa. “We have also received interest on just the sensor package developed by us for the platform, for fitment on other designated airborne platforms of countries in the interests of commonality or other compelling factors,” a member of the project told Livefist. 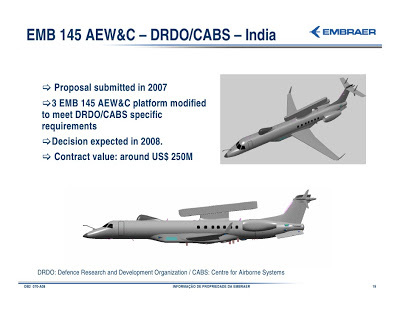 In a statement released yesterday, the Ministry of Defence said, “The Airborne Surveillance System is a game changer in air warfare.  The AEW&C System is a system of systems populated with state-of-the art Active Electronically Scanned Radar, Secondary Surveillance Radar, Electronic and Communication Counter Measures, LOS (Line of Sight) and beyond LOS data link, voice communication system and self protection suite, built on an Emb-145 platform, having an air to air refueling capability to enhance surveillance time. Complex tactical software has been developed for fusion of information from the sensors, to provide the air situation picture along with intelligence to handle identification/classification threat assessment. Battle management functions are built in house to work as a network centric system of Integrated Air Command & Control System (IACCS) node.”