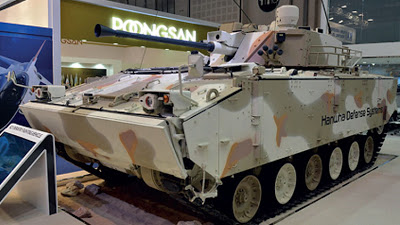 Hanwha Defense Systems (Stand 12-C35) of the Republic of Korea (ROK) has brought its latest production K21 infantry fighting vehicle (IFV) to IDEX in an effort to win a first export contract for it. It has been developed to meet the requirements of the ROK Army and has also been referred to as the Next Infantry Fighting Vehicle (NIFV), with an estimated 500 units under contract or delivered.

When compared with other IFVs, the K21 is well armed with a two-person turret armed with a 40mm cannon and a 7.62mm co-axial machine gun (MG), with some models having a twin anti-tank launcher mounted on one side of the turret.

The K21 IFV has a combat weight of 25 tonnes and unlike most other tracked IFVs is fully amphibious with additional buoyancy aids and is then propelled in the water by its tracks at a maximum speed of 6km/h. It is fitted with an in-arm hydropneumatic suspension system, which not only provides a good ride for the crew consisting of commander, gunner and driver, and nine dismounts, but is also a more stable firing platform.

To meet potential export customer requirements, Hanwha has developed the K21-105 medium tank. This consists of a K21 IFV hull modified to take the Belgian CMI Defence two-person turret armed with a 105mm rifled gun and a 7.62mm co-axial MG. This combination has already completed its mobility and firing trials in South Korea, as well as in an undisclosed Asian country in Asia, believed to be Indonesia.

In addition to firing conventional natures of 105mm ammunition, the system can fire a laser-guided projectile fitted with a tandem high-explosive anti-tank (HEAT) warhead to neutralise targets fitted with explosive reactive armour, out to a maximum range of 5,000m.

The company has also developed an armoured recovery vehicle, a command post and a driver training vehicle based on the K21 IFV platform, which are in service with the ROK Army.