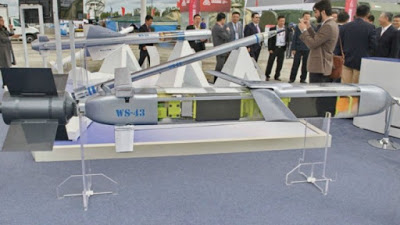 A mock-up of the WS-43 glide bomb system that was demonstrated to the Indonesian Armed Forces on 26 September 2016. (photo : fyjs)

Senior representatives from the Indonesian Army (Tentara Nasional Indonesia – Angkatan Darat, or TNI-AD) were recently in China to witness a live-fire demonstration of the WS-43 rocket-assisted glide bomb, the service announced on 10 October.

The demonstration was attended by the artillery regiment’s director of doctrine, education and training, Brigadier General Yudi Satriyono, and the director for management, research and development at the TNI-AD’s air defence artillery division, Colonel Ruly Chandrayani. 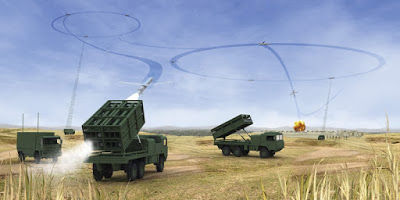 The WS-43 system has been developed by China Aerospace Science and Technology Corporation, and was first unveiled at the Airshow China 2014 exhibition in Zhuhai.

According to information gathered by IHS Jane’s from the exhibition, the system can deliver payloads of up to 20 kg, at distances of up to 60 km, and loiter for up to 30 minutes before hitting its target.

The glide bomb relies on a combination of inertial navigation and GPS for mid-flight guidance, and imaging infrared (IIR) for terminal guidance. The weapon can track, and engage both moving and static targets. Prior to the demonstration which was conducted on 26 September, representatives from China’s Aerospace Long-March International Trade (ALIT) were in Cimahi, West Java, to conduct a briefing on loitering munition systems, including the WS-43.

The briefing, which was conducted on 15 August, was jointly conducted with Indonesian defence company PT Global Difens Mandiri.