Australia Gets Its Air Force One 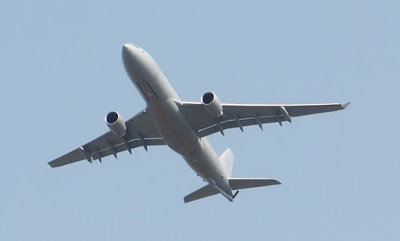 Australia is getting its own Air Force One – albeit a budget version.

After years of deliberations and political hesitancy, the Defence Department has been given the go-ahead to convert a KC-30A air-to-air refuelling aircraft, essentially an Airbus A330, into the VIP jet, replacing the ageing leased fleet.

First floated in a white paper, Defence has admitted, five months after it was first asked, it is moving ahead with modifications of one of its $204 million refuellers to give the Prime Minister an office in the air.

The new VIP jet is to be kept “modest” with only the minimum required modifications, remain capable of acting as an air-to-air refueller, but will also allow for “the continuance of Government business whilst in transit”, meaning the Prime Minister will remain in contact at all times.


The government has chosen the cheapest of the options available to it, following former British prime minister David Cameron’s lead. Defence confirmed it was “managing the modification”,  with the cost to come from $190 million already set aside to alter planes according to the air force’s needs. Britain managed it for £10 million, which equates to about $16.5 million.

The current Australian VIP jets, which include two Boeing Business Jet 737s as well as three smaller planes, are shared between the Prime Minister, dignitaries, visiting royal family members, the Governor-General and ministers. Leased in 2002 during the Howard years, frustrations have recently risen over the fleet’s limitations, of which size is one. The 737s can carry fewer than 40 people, meaning business delegations and (paying) media cannot travel on the same aircraft, raising issues during multi-stop trade missions.

The range of the 737s has also proven frustrating – a trip to Washington required two stops for refuelling.

The Royal Australian Air Force describes the KC-30A on its website as being capable of carrying 270 passengers while in transport mode, with a range of 14,800 kilometres.

The new, larger jet won’t solve all the government’s transport woes as the decision means the government is replacing two planes with one. Protocol dictates the Governor-General takes precedence over the Prime Minister.

But a former adviser who often travelled on the current Boeing Business Jet said it would be an improvement, with the BBJ planes “not great for the role”.

“They are not suitable planes for a country on the other side of the world,” he said.

“They are very small and only fit staff, which is an issue when you are on delegations, or need to take the media with you, which is what every other country does. “It’s understandable that there has been political angst over the purchase – as there is for any large expensive that seems extravagant, but a plane like this is something every government in the world has and we are a serious middle power and it is entirely appropriate we have the same.”

Sean Kelly, a former adviser to prime ministers Kevin Rudd and Julia Gillard, wasn’t quite as harsh in his assessment of the current VIP fleet – “It’s a great trip, you’re on a plane, there are private staff there to really meet your every whim, there is reasonable amount of space, there is a lot of privacy, it’s a joy to fly with them” – but agreed there were limitations.

“The main benefit would be being able to take the press pack and that is a benefit for the Prime Minister and for the journalist themselves,” he said.

“If you bought a bigger plane, then you would be able to take the press pack with you, which would automatically mean that coverage of the Prime Minister was made simpler, which would also serve voters.”