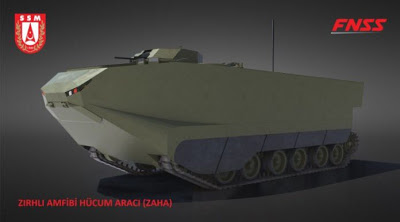 The new Turkish ZAHA amphibious assault vehicle most likely to be developed on Kaplan chassis. The Kaplan has a low silhouette, and with its twin 6 road wheeled tracks, has the ability operate in hot/cold weather conditions at high speed not only on asphalt and stabilized highways, but also in soft soil, muddy and rough terrains.