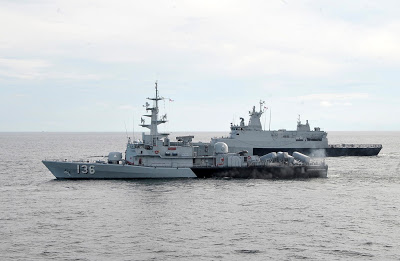 MELBOURNE, Australia — Malaysia’s centerpiece plan for the restructure and recapitalization of its Navy has also been adversely affected by the country’s budget woes, leaving most of it underfunded or unfunded altogether.

The so-called 15-to-5 plan, unveiled in 2015, calls for a reduction of the Royal Malaysian Navy order of battle from 15 to five classes of ships and submarines, which it hopes will trim sustainment costs by retiring older ships and reducing the number of ship classes operated by the RMN by 2030.

Of these, only six lightly-armed Kedah-class offshore patrol vessels are already in service together with two French Scorpene diesel-electric submarines. Malaysia has also ordered six littoral combat ships based on the French Gowind 2500 design under a $2 billion contract signed in 2011, with two ships in various stages of construction at Malaysia’s Boustead Naval Shipyard. 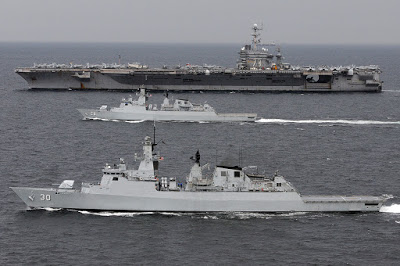 RMN frigate and US carrier (photo : US Navy)

The 3,000-ton ships will be armed with the Kongsberg Naval Strike Missile and MBDA’s vertical launch MICA for anti-ship and anti-aircraft work respectively, along with 57mm and 30mm guns as well as torpedo tubes. The first ship is expected to be delivered to the RMN in late 2019 or early 2020.

Malaysia is also pressing forward with its Littoral Mission Ship program, signing a contract in early November 2016 with China’s State Administration of Science, Technology and Industry for National Defense for an initial four ships with two built by Boustead and the other two in China.

Neither the design of the ship nor the contract value has been disclosed, although it is known that the ships only will be equipped with guns; they will also be fitted for additional weapons and sensors, but budget constraints may affect their equipping. Under the 15-to-5 plan, these ships will replace a number of vessel classes currently in the RMN including the RMN’s Laksamana-class corvettes.

However, Malaysian defense analyst Dzirhan Mahadzir told Defense News that the RMN’s priority should still be the introduction of multirole support ships or MRSS, citing the strategic sealift capability gap left by the loss of the former U.S. Navy Newport News-class landing ship tank KD Sri Inderapura following an onboard fire in 2009. 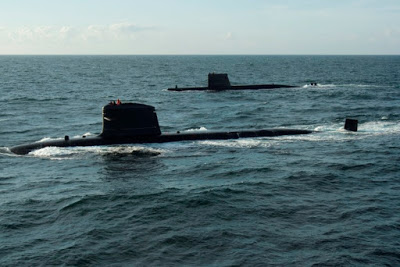 Mahadzir noted that the MRSS also “will allow the RMN to conduct humanitarian assistance and disaster relief operations more effectively and also move troops and equipment in large quantity where airlift is not possible or available.”

Indonesian state-owned shipbuilder PT PAL signed a memorandum of understanding with Boustead in late 2016 to collaborate on Malaysia’s MRSS program, which will be based on the Maksassar-class design used by the navies of Indonesia and the Philippines.

To sum up, it must be noted that Malaysia’s most immediate and pressing security challenges are in the maritime domain. In addition to the spillover of lawlessness and banditry from the southern Philippines into its eastern states, Malaysia — like neighboring Indonesia and Singapore — has had to grapple with piracy off its coastline in both the Malacca Straits and South China Sea.

This is on top of the need to patrol the offshore oil and gas fields that form a significant part of the country’s revenue stream, and to enforce its claims to the disputed islands and features of the South China Sea. With no end to its budgetary squeeze in sight, the RMN may find itself forced to sustain a shrinking pool of elderly vessels, casting further doubt on Malaysia’s ability to secure its own waters.