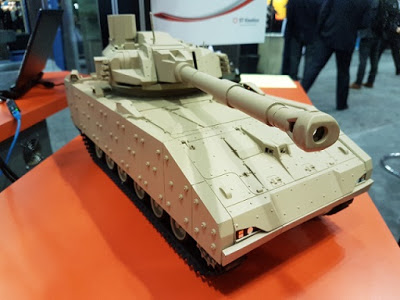 At 2017 AUSA Global Force, ST Kinetics is offering its Next Gen Armored Fighting Vehicle (NGAFV) to the US Army for the service’s Mobile Protected Firepower (MPF). In concept, the MPF is seen as a highly mobile vehicle that is able to accompany and support Infantry Brigade Combat Teams, and aid reconnaissance-in-force missions. The MPF will be a fully tracked armored vehicle light and small enough to negotiate urban areas, and traverse poor roads and bridges in underdeveloped regions of the globe.

Although still in the early stages, the US Army hopes to field an MPF vehicle by the mid-2020s.

The NGAFV has been developed by ST Kinetics and its demonstrator includes the company’s HMX3000 fully automatic transmission and CMI’s COCKERILL 3000 series turret.

Fully digitised and with the option of drive by wire, the NGAFV is to replace the Singapore Armed Forces’ M113A ULTRAs.