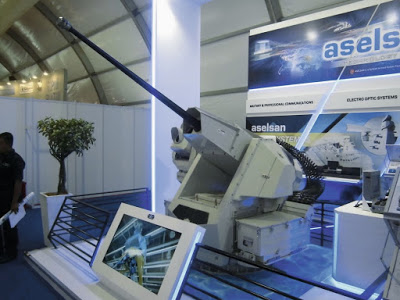 A mock-up of the SMASH 30 mm remote controlled naval gun system by Aselsan, on display at LIMA 2017. (photo : Jane’s)

Speaking to Jane’s at the Langkawi International Maritime and Aerospace (LIMA) exhibition on 22 March, an official from the service has also confirmed that the system will be positioned as the OPV’s primary weapon, and will be complemented by a stern-facing 12.7 mm machine gun position.

The same type of weapon has previously been selected by the service for another class of newbuildings that the service is anticipating from Destini Shipbuilding & Engineering: the 44 m New Generation Patrol Craft (NGPC).