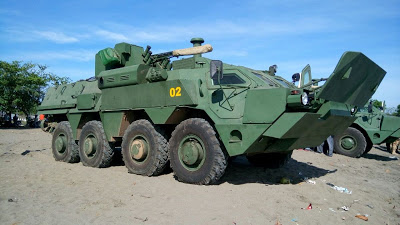 Information in the media about the possibility of Indonesian Marine Corps refusal to buy Ukrainian BTR-4M is the demonstration of competitive struggle for markets after the successful delivery of the first batch of Ukrainian BTR-4M in Indonesia. UKROBORONPROM enterprises will continue to fulfill all the commitments to foreign partners.

In January 2017, 5 units of armored personnel carriers BTR-4 M were successfully delivered to the Marine Corps Indonesia according to the contract signed in early 2014 between SFTE “SpetsTehnoEksport” and the Ministry of Defense of Indonesia. Testing of the military equipment in Ukraine and Indonesia by a special commission of the Customer took place prior to military equipment transfer.

Thus, in January 2017 Indonesia Ministry of Defense tested Ukrainian armored vehicles on their territory prior to accepting those into service. The Customer tested amphibious capabilities of the vehicles in the sea, conducted fire tests, checked their driving performance. According to test results the Protocol was signed. Ukrainian armored vehicles showed excellent results in accordance with all 47 evaluation parameters of this Protocol. Special commission of the Indonesian Defense Ministry had no complaints concerning the vehicles.

Similar tests were conducted in Ukraine before sending military equipment to Indonesia. On 06.15.2016 – according to the results of BTR-4M tests – representatives of the Ministry of Defense of Indonesia confirmed with the official document that the Ukrainian vehicles meet all the requirements of the international contract, and that there are no comments/complaints about the armored vehicles.

Last week media distributed false information about UOP’s alleged loss of the Thailand market. The State Concern “UkrOboronProm” once again emphasizes the need to verify the information, distribution of which can result in losing Ukraine’s image on the international arena.