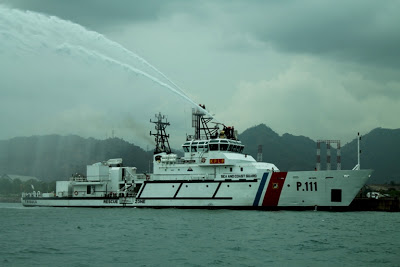 The five patrol vessels include the KN. Trisula (P111); KN. Kalimasadha (P115); KN. Kalawai (P117); KN. Chundamani (P116); and KN. Gandiwa (P118).  The ships are based at various locations around the country and will be upgraded at their respective homeports.

The high-resolution SCANTER 6000 series will enable the Indonesian patrol boats to detect and track small targets – from the horizon up to the ship itself –on the surface and in low-level air space and in all conditions”, explains Jesper Tolstrup, Director, Radar Applications for Terma in Lystrup, Denmark.

“Although these patrol vessels do not have facilities for embarked aircraft, the radar provides the capability for directing helicopters for search and rescue, fisheries patrol, pollution monitoring, or other enforcement missions.  The radar is also optimal for detecting or controlling unmanned aircraft”, Tolstrup said.

Indonesia is a maritime nation that sits astride the busy sea lanes that connect the Indian and Pacific Oceans. With more than 17,000-plus islands, it is the largest archipelago in the world, stretching 2,500 miles, the distance of New York to San Francisco.  Indonesia has several different maritime entities, to include the Navy, Coast Guard (Baklama), and the Sea and Coast Guard (KPLP). “In our challenging operating environment, we require a radar with very good detection ranges and high resolution target discrimination. When it comes to search and rescue, being able to find a small lifeboat or a man in the water at great distances, in darkness or in bad weather, the radar is a lifesaving tool,” said Commanding Officer KN. Gandiwa (P118), Joseph J.H. Rengga, S.H., M.Mar.  “The SCANTER 6000 does that, with great reliability.”

Indonesia’s waters have a high volume of shipping, with many challenges.  There is piracy, smuggling, and other illegal activities, and many places to hide.  The country’s offshore energy industry is growing, which requires safety, security, and environmental monitoring. Many countries send their fishing vessels to Indonesian waters, and many of them are taking the fish without a license – a multi-billion dollar loss to Indonesia every year.

“Terma responded to our request in a very prompt manner,” Head of Infrastructure of Sea and Coast Guard, M. Dahri, S.H., M.HUM, said.  “We issued an urgent request, and they have made these radars, tested them, and shipped them to the different homeports for simultaneous installation in a very short time.”

The SCANTER 6000 is a coherent X-band 2D solid state radar developed by Terma to address market requirements for improved surface and low airspace situational awareness. It has been specifically designed as an affordable all-weather sensor solution to plug the gap between standard marine navigation radars and more expensive military surveillance radar systems.

The SCANTER 6000 naval surveillance radar will also be installed on Royal Navy’s new Type-26 Global Combat Ships. The radar is in service on French Navy’s Charles De Gaulle aircraft carrier and L’Adroit vessel, U.S. Navy’s Stiletto high speed experimental vessel and on the Danish Navy’s Frigate Iver Huitfeldt. It is also supplied to the navies of Germany and UAE and for new OPV programs as well as update programs.