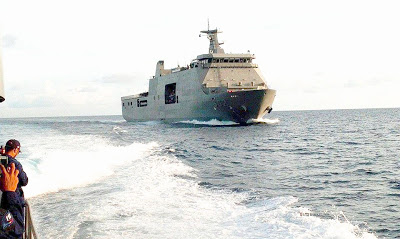 This was confirmed by Philippine Navy (PN) spokesperson Capt. Lued Lincuna in a message to the PNA.

“After almost four days of voyage, around 11 a.m. today (May 8), BRP Davao Del Sur has anchored at vicinity one mile from Pier 13. She will undergo Customs, Immigration, Quarantine and Security procedures,” he said.

Welcoming ceremonies will be on May 10, with PN flag-officer-in-command Vice Admiral Ronald Joseph Mercado likely spearheading the event, Lincuna added.

The BRP Davao Del Sur left the PT PAL (Persero)’s shipyard in Surabaya, Indonesia and started her voyage home on the afternoon of May 4.

The SSV’s departure or send-off ceremonies was witnessed by Philippine Fleet commander Rear Admiral Gaudencio C. Collando and his party. p>The PN spokesperson said the second SSV will boost the Navy’s capability to conduct humanitarian assistance and disaster relief missions alongside with its troop and cargo missions.