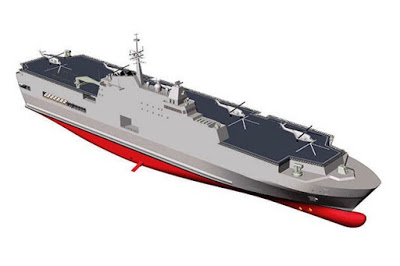 ST Marine is highlighting its latest Endurance 170 design, a landing helicopter assault (LHA) ship that measures 170m long, at IMDEX Asia 2017. It is an evolution of the Endurance 160, of which a scale model was on display.

Far more capable than the four-ship Endurance class currently operated by the Republic of Singapore Navy (RSN), ST Marine said it had a ‘potential customer’ for the Endurance 170. While the shipbuilder would not be drawn on who its client was, the RSN has talked since 2014 of acquiring a larger Joint Multi-Mission Ship.

There are five landing spots on the LHA’s full-length 4,200m² flight deck, plus a below-deck hangar deck can accommodate ten medium-sized helicopters.

The well deck can accommodate four landing craft plus up to 17 tanks on the vehicle deck. Another deck can fit 16 30t armoured vehicles. A 1,000m² medical facility, with three operating theatres, ten intensive care unit beds and 17 wards, is integral to the design.