Although its existence was officially announced as far back as 2009, the Singapore Army’s Very Slender Vessel (VSV) finally made its debut public appearance as a static exhibit at its Army Open House 2017 event that is being held from 27 May to 28 May.

According to army specifications, the VSV is a wave piercing watercraft that measures 16 m long, 2.4 m wide, and 2.5 m tall. The service also stated that the VSV operated by the Singapore commando forces for high speed interdiction missions at speeds in excess of 40 kt, although Jane’s understands from manufacturer specifications that it is also designed to be deployed for covert insertion and exfiltration of personnel with maximum transit speeds in the region of 60 kt. 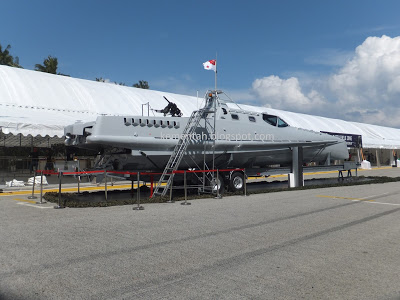 It is understood that the VSV was built by military small boat specialist Halmatic, a subsidiary of former shipbuilder Vosper Thornycroft before the latter’s UK-based operations were acquired by Babcock International. Jane’s earlier reported that the VSV product line includes three other models in the 18 m, 22 m, and 26 m sizes.

The VSV centres on a slender, low radar cross section canoe hullform with an elliptical cross-section and a length-to-beam ratio in excess of 6:1. The VSV’s wide chines provide roll stability when stationary, while generating hydrodynamic lift during transit as well as control heeling when it performs tight manoeuvres.

An army commando spokesperson briefed Jane’s on 25 May that the VSV is operated by three crew – comprising the boat commander, coxswain, and navigator – and is typically fitted seating for up to 10 personnel.

“A standard high speed craft, rigid hull inflatable boat (RHIB), or even our own assault boat usually planes on the water’s surface and this produces an extremely uncomfortable ride over long, high speed transits in higher sea states,” the spokesperson said.