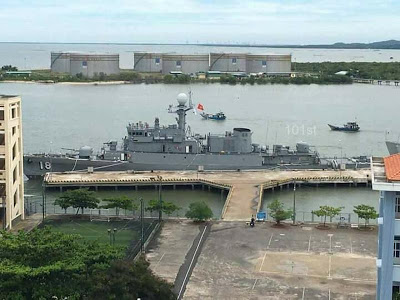 As reported in the Asian Web resources in the Vietnamese naval base at Vung Tau is preparing for the official handover ceremony of Vietnamese Navy arrived to former South Korean corvette PCC 761 Gimcheon type Pohang.

PCC 761 Gimcheon was inducted into the South Korean Navy in 1987 and taken out of their composition December 31, 2015. It is one of 24 corvettes type Pohang standard displacement of about 1260 tonnes constructed in several modifications South Korean shipyards in the 1980s and early 1990s. This type includes the well-known and corvette PCC Cheonan is 772, sunk March 26, 2010 as a result of allegedly DPRK torpedo attack submarine. Since 2009, the type of ships Pohang commenced withdrawal from the South Korean Navy, so far excluded from the list of seven ships. Head corvette PCC Pohang 756 is now installed as a museum ship in Pohang, in whose honor and was named.

Decommissioned ship corvette PCC 758 Gyeongju in 2015 was transferred to Peru, and now corvette PCC 761 Gimcheon transferred to Vietnam, and another RCC 762 Chungju is preparing to transfer to the Philippines. It is reported that Philippine sources confirm the upcoming transfer of Vietnam corvette Gimcheon, testifying that his future Vietnamese crew was trained in South Korea at the same time the future of the Filipino crew of the corvette Chungju.

Recall that in 2014 the Colombian Navy also received a similar pattern derived from the South Korean Navy corvette PCC 755 Anyang ( one of the four types of ships Donghae , built in the early 1980s and decommissioned in 2009-2011).


Judging by the published photos of former corvette Gimcheon in the Vietnamese naval base in Vung Tau, before transferring to Vietnam with him was dismantled aft 76mm Universal Compact Gun Mount Oto Melara and both 324-mm triple-tube torpedo launchers for anti-submarine torpedoes, and the forward 40-mm twin Gun Mount Oto Melara Twin Compact replaced by a six-barrel 20 mm artillery installation Navy Vulcan.