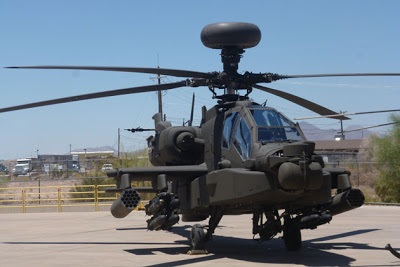 Boeing has begun to plan for the likely early retirement of the Australian Army’s Tiger armed reconnaissance helicopter by considering such a requirement as a ‘prospect’. The company recently demonstrated its capabilities, including linking with UAVs.

In February this year the Australian Government in its Defence White Paper planned for the replacement of the troubled Tiger fleet from the mid-2020s.

The helicopter had a difficult birth and continues to struggle to achieve availability and datalink requirements and has not yet operated from the Royal Australian Navy’s new amphibious assault ships.

The possibility of a new requirement led Boeing to pull out almost all the stops at the Australian Air Show 2017, there was no public flight display, and demonstrate the AH-64E Apache to Australian personnel and to also demonstrate integration with a grounded Insitu ScanEagle UAV.

‘It took about two weeks to work out how to integrate with the ScanEagle; not full-time but we needed to find laboratory time to carry out the work,’ a company spokesperson said.

‘We had to lease the Apache and get the ScanEagle brought down from Queensland and we looked at how we could set that up.’

The company has added Australia to its potential future customer list, along with another in Asia-Pacific and one in Europe, which could take manufacture of the aircraft out beyond the current production line of 2027. The company is hoping to hit contract for some of these potential orders in the next four years.

The company is continuing to deliver AH-64Es for the US Army, and has just completed delivery of the last of 36 Apaches to South Korea, eight aircraft are in flight test for Indonesia, and Boeing has 24 on contract for Qatar.

The spokesperson said further that the production line can produce almost 100 helicopters a year and the company expects to achieve close to that level ‘in the next few years at least’.