MELBOURNE, Australia — Malaysia has adapted its Russian-built Sukhoi Su-30 multi-role combat aircraft to drop U.S. laser-guided bombs, with a successful release of a live weapon at the end of last year.

A video by the Tentera Udara Diraja Malaysia, or Royal Malaysian Air Force, to celebrate its 59th anniversary showed a brief clip of a Su-30MKM dropping a 500-pound GBU-12 laser-guided bomb, with the accompanying caption stating that the event happened in November 2016 at the service’s weapons range at Kota Belud in the state of Sabah, Malaysia.

The segment of the Su-30 dropping the GBU-12 has since been deleted from the video.

It was unclear how the Air Force guided the weapon during the successful weapons release. Malaysia possesses the Thales Damocles surveillance and targeting pod for its Su-30MKMs, which it uses in conjunction with the Russian KAB-series of laser-guided bombs and Kh-29TE air-to-surface missile. 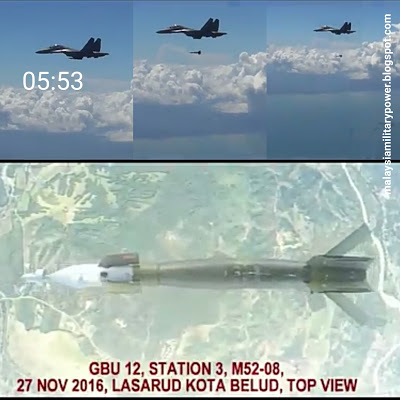 Malaysia operates a fleet of 18 Su-30MKMs alongside its Hornets as the Air Force’s primary combat aircraft. The service’s Sukhois are fitted with a mixture of Russian and Western systems, while Malaysia’s Hornets have previously employed the GBU-12 successfully against armed militants from the southern Philippines who had taken over the town of Lahad Datu, Sabah, in 2013.

Previous articleRaytheon Gets Contract for Production of AIM-9X Bock II Missiles for Indonesia and Others
Next articleKC-390 Kicks off Sales Tour Coming to New Zealand, South East Asia and Others