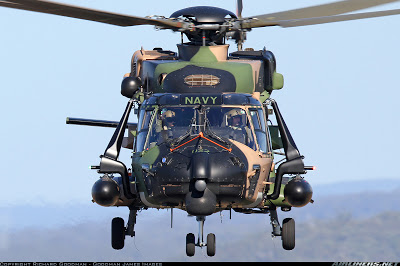 Multi-role helicopter support to the Royal Australian Navy Fleet has been enhanced by trials recently completed off the east coast of Australia.

In a joint activity conducted during the months of May and June HMAS Anzac embarked an MRH90 flight from 808 Squadron for a trial designed to expand the capability of Anzac class frigates to include day and night flight deck operations in a range of weather conditions.

An Aviation Medical Officer, a meteorologist and a Flight Deck Marshaller also joined Anzac for the period.

Until now, the helicopter has only conducted utility evolutions such as vertical replenishment and light winch transfers to Anzac frigates.

The test aircraft – callsign Cobra 22 – undertook landings and take-offs in a variety of conditions while at its maximum embarked operating weight of 10,600 kilograms.

Commanding Officer Anzac Commander Michael Devine said his team was energised by their part in the successful trials.

“It was a professionally rewarding experience to have participated in trials that will inform the development of significant capability that will have an immediate and enduring benefit to the Fleet,” he said.

Anzac received a night vision lighting upgrade in 2016 which allowed the test team to safely perform landings in even the darkest conditions. 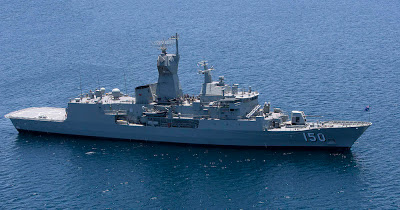 Aircraft Maintenance and Flight Trials Unit Test Director Lieutenant Commander Andrew Rohrsheim said he was impressed with the aircraft’s performance and features which were well suited to the frigate flight deck.

“The MRH90 is a wonderful aircraft to fly and the helmet-mounted sight and display provides great situational awareness for the aircrew in night and day conditions.”

The aircraft remained on the flight deck for the period of the flight trial and was exposed to the elements day and night. Nevertheless Cobra 22 still achieved excellent reliability and availability which is a testament to the care and attention provided by the team from the 808 Squadron.

“Moving the aircraft, stores and support equipment from HMAS Canberra to Anzac for the short trial was hard work, but we were pleased to see MRH90 performing so well in a new environment and proud that we helped make it happen.”

To ensure the aircraft was exposed to a wide range of environmental conditions, the embarked meteorologist Lieutenant Tim Forge worked closely with the ship’s navigator to position the ship correctly in preparation for each flying serial.

As a result, the ship operated as far north as Cooktown to find warm weather, then repositioned hundreds of nautical miles away the next day to find the required environmental conditions. Four weeks were necessary to explore the full spectrum of weather conditions.

As a result of the trial, MRH90s will soon be available to perform the full spectrum of helicopter logistics support to the Anzac class.As a multi-role helicopter, the MRH90 can undertake personnel transport, search and rescue and replenishment activities.