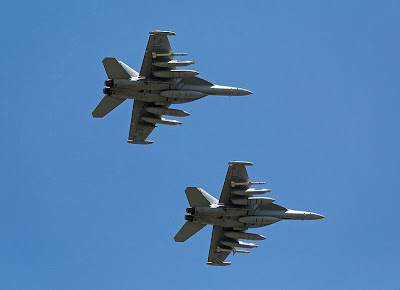 Since the first two Growlers arrived in Australia in February 2017, the fleet has grown to the full twelve aircraft.

Minister Payne said the arrival of the Growler provides a potent and technologically advanced new capability for the Australian Defence Force (ADF).

“We are the only country outside the United States operating the EA-18G Growler and the full fleet arrival represents a significant leap forward in joint electronic warfare capability,” Minister Payne said.

“This is an amazing achievement for the ADF. These aircraft are able to support the full spectrum of Defence missions, including operations with coalition partners.

“The EA-18G Growlers will work with Army and Navy to deliver a networked joint force able to manoeuvre and fight in the electromagnetic spectrum.

“The arrival affirms the Government’s commitment to maintain our capability edge and prepare for the more complex and high-tech conflicts of the future.”

Chief of Air Force, Air Marshal Leo Davies said he was extremely proud of all the personnel who have worked on this project both in Australia and overseas.

“The delivery of this capability shows what our Defence Force members are capable of alongside our US counterparts,” Air Marshal Davies said.

“The US Navy has been very generous in their training of our aircrew and maintenance teams, and we have cemented our reputation as credible coalition partners.

“Australian Growlers have already conducted successful weapon firings and integration flights with RAAF F/A-18F Super Hornets and US Navy EA-18G Growlers as part of Operational Test and Evaluation. We have also had the graduation of the first Operational Transition course.

“Through our partnership with the US Navy we are already planning to keep Growler at the forefront of electronic attack capability throughout the life of the aircraft.

“I wish to acknowledge the commitment of RAAF Base Amberley, the Estate & Industry Group and the 6 Squadron families who have generated the home of this exciting new aircraft.”