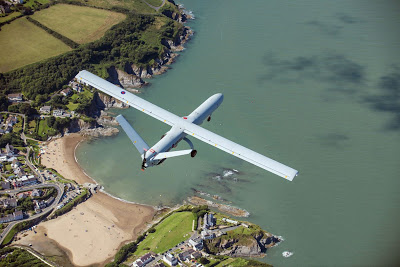 Thales has offered the Watchkeeper UAS for the Indonesian Air Force’s requirements
System is being considered to improve the service’s surveillance, reconnaissance, and target acquisition capabilities

According to sources from within the service who spoke to Jane’s on 11 July, a presentation on the UAS’ capabilities was made by officials from Thales UK to the TNI-AU’s office for planning a budget in mid-April 2017. The UAS, which has been derived from Elbit Systems’ Hermes 450 tactical unmanned aerial vehicle (UAV) system, was originally developed for the British Army.

The Watchkeeper airframe generally has the same specifications as the Hermes 450, including a wing span of 10.5 m, a maximum take-off weight of 550 kg, and a maximum payload of 180 kg. The system is propelled by a single piston engine, and features an endurance of about 17 hours with a service ceiling of 5,485 m.

The UAS can be equipped with two sensor payloads, and in the UK configuration, features a forward-mounted Thales I-Master ground-moving target indicator/synthetic aperture radar (SAR/GMTI) and a rear-mounted electro-optical/infrared (EO/IR) sensor turret.

The airframe can also be equipped with effectors such as laser designators and target markers, and weapons such as the Free Fall lightweight multi-role missile (LMM) air-dropped, precision-guided munition from Thales Advanced Weapon Systems.