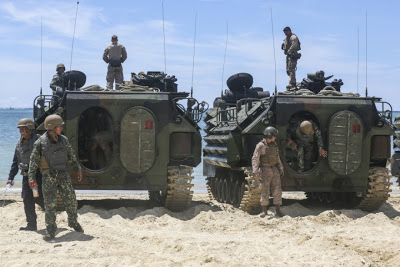 Members of the Philippine Marine Corps under the Assault Armor Battalion trained with their United States counterparts inside US military base Camp Schwab, Okinawa, Japan, on July 18, 2017.

According to US Marines this is the first time the Philippine military has trained on an American base.

In April 2016, it was reported that Hanwha Techwin, previously Samsung Techwin, was declared as the winning bidder for the Department of National Defense’s Amphibious Assault Vehicle (AAV) acquisition project.

8 AAVs are expected to be delivered in 2018. These assault vehicles can be housed and deployed at sea by Philippine Navy’s two Tarlac-class landing platform docks.