Australia’s next eight F-35A Lightning II Joint Strike Fighters are in production at prime contractor Lockheed Martin’s Fort Worth final assembly plant ahead of delivery to the Commonwealth in 2018.

Australia is acquiring 72 F-35As to replace the RAAF’s F/A-18 ‘classic’ Hornets, the first two of which, known as AU-1 and AU-2, were handed over in late 2014 and have since been based at Luke Air Force Base, Arizona as part of the F-35 International Pilot Training Center – a brief visit to Australia for the Avalon Airshow earlier this year aside.

“Matter of fact, talking to our program people, there is a chance we might actually deliver the first of those airplanes late this year,” Steve Over, Lockheed Martin’s director of F-35 international business development, told media in Canberra on Monday.

Then in December 2018 two F-35s are due to be delivered permanently to Australia, to begin Australian-specific operational test and evaluation. 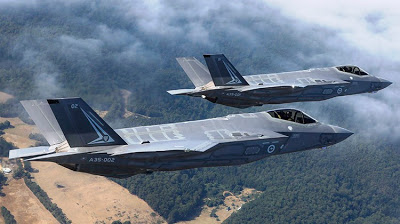 
F-35A AU-3 was inspected on the Fort Worth production line by Australian ambassador to the US Joe Hockey in May, and recently had its vertical tails installed, becoming the first Australian F-35 to feature vertical tails built by Melbourne’s Marand.

Aircraft AU-3 through -10 are eight of the 90 F-35s currently being built under low-rate initial production (LRIP) lot 10, while a further eight RAAF F-35As will be built under LRIP 11. The next F-35 production batch will be for a total 141 F-35s – Over said the term “low-rate” is now something of a “misnomer” given the quantities involved – with initial funds for LRIP 11 released under two ‘undefinitised contract actions’ signed by the JSF Program Office (JPO) with Lockheed Martin earlier in July.

When final LRIP 11 contracts are signed by the end of the year, Over said Lockheed Martin expects the unit price of an F-35A to be “significantly below” the US$94.6 million “aggregate negotiated” price for an A-model built under LRIP 10.

“The production ramp up is here,” said Over. “And that’s reflected by the production numbers in lot 10 and lot 11.”