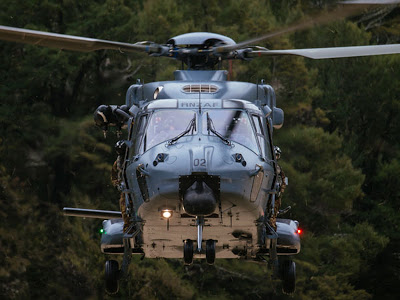 The Royal New Zealand Air Force’s 10-ton class of NH90s were delivered between 2011 and 2014 under a $571 million contract replacing a fleet of 14 UH-1H Iroquois helicopters. (photo : RNZAF)

WELLINGTON, New Zealand — New Zealand’s Ministry of Defence has issued a request for tenders for a simulator to train pilots to operate the NH90 medium utility helicopters flown by 3 Squadron of the Royal New Zealand Air Force.

The service operates eight of the TNZA variant of the NH90 helicopters from the Ohakea air base located north of Wellington, the capital of New Zealand. The Air Force anticipates an annual “flying“ rate for the simulator of between 1,500 and 1,900 hours.

A minimum requirement for the simulator’s software and hardware is meeting the NATO Helicopter Management Agency’s final operating configuration, including five multifunction displays — and level-three standards as detailed in European Aviation Safety Agency certification specifications for helicopter flight simulators; however, the MoD said that “a full-motion simulator is also acceptable.“

The timeline from when a contract is signed to delivery to New Zealand will be approximately two years. The RFT closes Sept. 28, 2017.

A request for proposals for simulator services was awarded in September 2016 to Helicopter Flight Training Services GmbH. This, the MoD told Defense News, was done to allow interim access to simulation training while a decision was made on potential procurement of a simulator for operation within New Zealand.

To support the new helicopters, the Air Force opened the Helicopter Synthetic Training Centre, or HSTC, in Ohakea in 2012, which is also the home base to a fleet of A109 helicopters.

Training to date has included a Virtual Interactive Procedure Trainer — a computer-based NH90 part task trainer — at Ohakea’s HSTC and traveling overseas to use NH90 simulators.